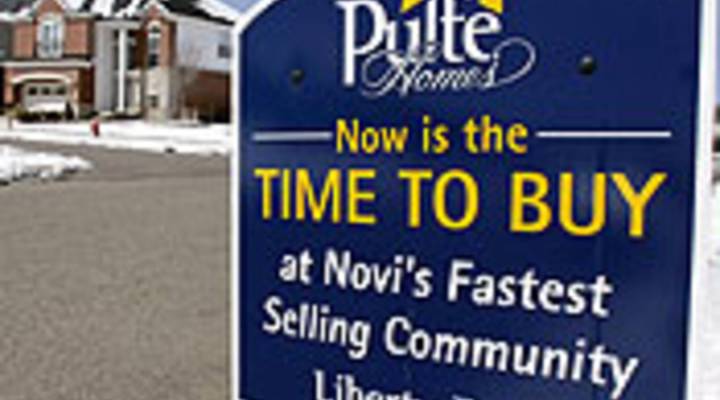 Tess Vigeland: The National Association of Home Builders is out today pushing for an extension of the $8,000 federal home-buying credit. July was the last month, timing-wise, in which builders could break ground on houses and have buyers still qualify for the credit. But what if the desire to own your own home is to blame for the crisis itself? John Wasik is the author of the book, “The Cul-De-Sac Syndrome.” And he argues there is a dark side to this part of the American Dream. John, welcome to the show.

JOHN WASIK: Thanks for having me, Tess.

VIGELAND: The book title refers to cul-de-sac syndrome. And of course, I think that puts a certain picture in our minds, probably some kids on bikes, cars in the driveway at the end of the neighborhood road. But that’s not actually the syndrome that you’re talking about. Explain what you mean.

WASIK: Well, I literally didn’t mean a cul-de-sac as in a suburban neighborhood, but the concept that we’ve hit a dead end and we need to back out of it. That what we were doing in terms of housing was unsustainable, that we were doing it the wrong way, in fact. We were overdeveloping, we were over-leveraging, and we were even doing some things that were ecologically unsustainable.

VIGELAND: You argue that this bubble was brewing for centuries, not just the last several years. How so?

WASIK: Oh, there have been housing collapses throughout history, starting in the 18th century really. It’s the idea that we were obsessed with land. People came to North America to get a piece of the pie, to build their castle. Jefferson built on this desire to own a tract of land, to farm it, to make something of yourself. And then in typical American fashion we transform this overwhelming need to have something of our own into this status symbol.

VIGELAND: Why do you think the house became that symbol?

WASIK: It was largely a vestige of our ego, of our aspirations, of the things we wanted most out of America. And that’s why I really fault the overemphasis on actually owning homes in terms of the American Dream. It’s always a deal where you can buy a bigger house. And many people did. And they did it because they could over-leverage, they did it because the tax law supported it, and they did it because highways were subsidized to places where there had been nothing before.

VIGELAND: You mentioned earlier that there have been housing busts before, and I wonder what your predictions are for the lessons that we will take out of this one. Obviously right now the housing market is in collapse. It’s hard to get a house because of the credit squeeze. But once the economy recovers and things start to turn around, how confident are you that we won’t simply go back to our old ways?

WASIK: Well, in some respects we will because a lot of building and development is based on 19th-century principles. You can say that any stick-built home with two-by-fours is based on the best 19th-century technology available. And that’s too bad because we have so many other things we can do in terms of technology in homes to not only make them greener but cheaper. Say, building modular homes, building them in factories, making them tighter designs, making them cybernetic, having them respond to the environment and respond to the grid.

VIGELAND: But aren’t those homes going to be more expensive because of all that technology?

VIGELAND: All right, a new vision for our neighborhoods. John Wasik is the author of “The Cul De Sac Syndrome.” Thanks so much for coming in.