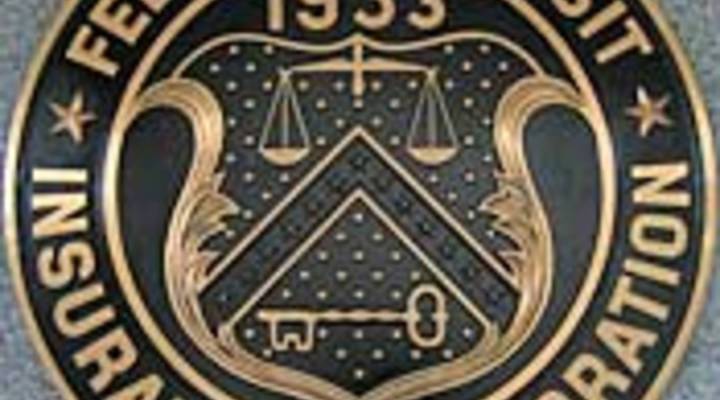 Tess Vigeland: Last Friday the FDIC swooped in to manage the year’s biggest bank failure. It facilitated the sale of Alabama-based Colonial BancGroup to the regional bank BB&T. It was the 77th bank failure of 2009. But it turns out this deal was a little different.

For most of the previous failures — the FDIC brought in healthy banks to assume leftover assets. And it took on a good chunk of the risk from those assets. But this time the agency also pushed for something called a clawback, where, if the bank rescue works, the FDIC gets some of its investment back.

Joining us now for some explanation is Karen Petrou. She’s managing partner at Federal Financial Analytics. Welcome to the program.

KAREN PETROU: Thanks very much, Tess.

VIGELAND: Now, this deal with Colonial Bank last Friday sort of changed the game. Can you describe what happened and why it was different?

PETROU: Colonial, just to put it in perspective, is the 5th biggest bank failure in U.S. history. This was a $25 billion bank with a lot of significant issues, including now criminal investigations and complexities that aren’t typical in bank failures — both from the size and the complexity and its big book of bad loans.

But this time the FDIC didn’t just look at it, say yuck, and hand it over. They looked at it and said, Yuck, but in case it’s not so bad, we want a little of the upside. And that’s the first time the FDIC has ever done that.

VIGELAND: So what are they actually getting out of this?

PETROU: The difference between this deal and the previous ones were that all the earlier acquisitions were heads-I-win, tails-you-lose deals, from the point of view of the private equity investor or the bank that took over the failed institution. They got all the upside, and the FDIC got all the risk. In this deal, the FDIC now says if the risk isn’t as horrendous as it might be, we get a little back, a “clawback,” a little bit of profit in 10 years from the acquiring institution.

VIGELAND: Is that kind of clawback deal unprecedented in a FDIC takeover?

PETROU: It is, it’s the first time they’ve done that, and I think it reflects a growing understanding of how to do even these larger deals and ensure that bank failures be handled in what the law says is the “least cost way.” The FDIC is funded by insured depositories, but it’s got a huge line of credit to the taxpayer.

VIGELAND: Why wasn’t this kind of thing a part of previous rescues. You know, you look back to the deal with Washington Mutual and Chase, which was also blockbuster, but really not much in it for the FDIC at that point, huh?

PETROU: I think it was because they weren’t ready, they were scared. And they just handed it over. They’re a bit more ready, even if we’re all still a bit scared. But at least they’re ready ,and they’re making better deals for the FDIC, and thus for the taxpayer.

VIGELAND: Are there any added risks when you use this kind of clawback deal?

PETROU: The risk might be that some investors want it all, and they might be reluctant to take over a failed bank. I do think it’s critical for the FDIC and bank regulators to move as quickly as possible. We really don’t need any zombie banks. But they’ve been moving, in my opinion, way too slowly, anyway. So I don’t know that now getting a better deal is going to have any adverse impact on the pace of transactions because I think they’re already too slow.

VIGELAND: All right, Karen Petrou is managing partner at Federal Financial Analytics. Thanks so much for your help today.

PETROU: Thank you so much, Tess.