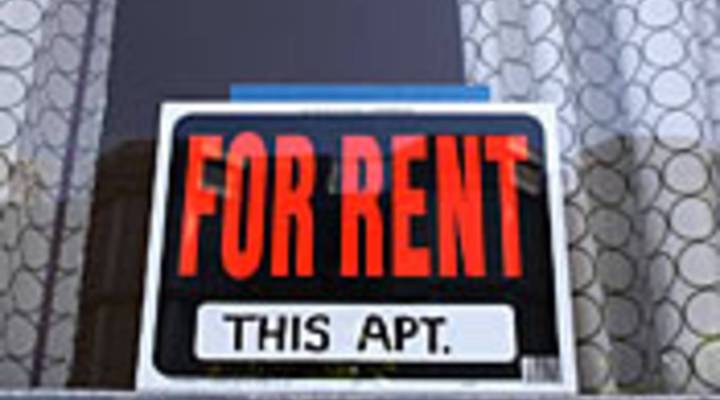 Stimulus could go to pay the rent

COPY
A sign advertising an apartment for rent is displayed in a window in San Francisco. Justin Sullivan / Getty Images
Fallout: The Financial Crisis

Stimulus could go to pay the rent

A sign advertising an apartment for rent is displayed in a window in San Francisco. Justin Sullivan / Getty Images
Listen Now

Tess Vigeland: The Boston Globe’s been doing some digging into where all the stimulus money went. Turns out, some of it went toward rent. Or at least toward pushing rentals as an alternative to home ownership. The Obama administration reportedly plans to push more than $4 billion into federally subsidized rental housing. It’s a major shift from the ownership society programs of the Bush administration. Joe Williams is deputy chief of the Boston Globe’s Washington bureau. Welcome to the program.

VIGELAND: So fill in some of the details of what the Department of Housing and Urban Development is doing. Where is this money going?

WILLIAMS: Basically it’s $14 billion in stimulus they got. They’re using about $4 billion of it to construct new, affordable rental housing nationwide. And that’s housing people can live in for a reasonable price. Some of it will be market rate, some of it will be specifically targeted to low income. And it’s targeted at backing off a little bit the ownership society that was so famously touted over the last couple of years.

VIGELAND: Are more rental units going to start popping up across the country, is this for urban areas, any details there?

WILLIAMS: It will be across the country. The one difficulty, the one sort of anxiety they have about this is in markets that have typically been really, really, expensive. Places like Boston, for example. Market-rate rental housing is really hard to find there, and to get enough land, to get enough people, to get enough of a project together to bid on an affordable housing development, it will be interesting to see how well that goes.

VIGELAND: How much of this new emphasis on renting do you think is a real shift in political thinking versus the practicalities of an upended housing market. It’s now easy to buy a house right now.

WILLIAMS: It’s a combination of both. They would like people to own homes. But the market is just absolutely disastrous right now. Let’s get back to a more sensible policy, they say. Over the last couple of years, we’ve gotten it out of whack. People have chosen the path of getting a home first, rather than renting as a way to get a home. Doing the traditional path where you rent a place first that you can afford, you save the money, you build up enough for the 15, 10, 20 percent down payment. And then you get a home in a sensible mortgage that you can afford.

VIGELAND: Certainly the notion of home ownership as an opportunity, something that can make your life better. That was not new to the Bush administration. It’s kinda part of the American dream that we all know of and love. I wonder does this move toward renting mean that that dream changes in any significant way?

VIGELAND: And what are proponents of more home ownership saying about this shift?

WILLIAMS: It was hard to find people who didn’t like the renewed emphasis on renting. But many of them said we think this makes sense given all wreckage that’s surrounding us in the housing market. Sure, we would like people to own homes, sure we think that home ownership is a means to not only stabilize neighborhoods, but also families. It creates upward mobility for African Americans and Latinos who are typically underrepresented in the housing market. So they are saying that the home ownership society has its place. But it needs to be a little bit more sensible, it needs to be decelerated, and it needs to be de-emphasized.

VIGELAND: Joe Williams is deputy chief of the Boston Globe’s Washington bureau. Thanks so much for coming in.