Bill Radke: Students going to college in the fall are starting to reach out to future dormmates. And that means creating some new traditions. Youth Radio’s Asha Richardson reports.

Asha Richardson: Amanda Thompson found out she got into Mills College last fall. Mills is a small, all-women’s school in Oakland, Calif. And Amanda’s joy quickly turned into a job.

AMANDA Thompson: I was really excited because it was my top choice. So I decided that I should join a Facebook group dedicated to the class of 2013. And when I searched there wasn’t one. So I figured who better to start a Facebook group than yours truly.

I’m going to Mills too. And I did the exact same thing. I immediately joined Amanda’s Mills College 2013 group. So have dozens and dozens of my classmates. Ashley Battle is my admissions counselor at Mills. And she says the site merely continues online what started on campus at pre-frosh visits.

ASHLEY BATTLE: Students meet here and they say, ‘Oh, let’s keep in touch. Oh, you’re in Texas. Oh, you’re in Arizona, you’re in New York. I’m not going to see you ’til August. Well, Facebook me or whatever or Twitter me.’

But there’s more to the Mills 2013 group than just making virtual friends. It’s changed the business of admissions at Mills. Now counselors can keep track of students with a personal touch. And they don’t have to spend any money.

BATTLE: We kind of will peek and say, OK who is joining the group? Does that mean they will be depositing later on and haven’t told us?

That peeking has been useful. At least for Battle. In her office, she was the first to persuade a student to come to Mills online.

BATTLE: Her status update said she was choosing between Mills and another school. And I wrote a very long Facebook message about why she should choose Mills. And then two days letter she told me she was coming. And I was like, ‘Yes!’

But we haven’t been swept up by the technology completely. The Mills Facebook group did do something old fashioned last month. We mailed handwritten letters to each other — a more traditional way to say hello. 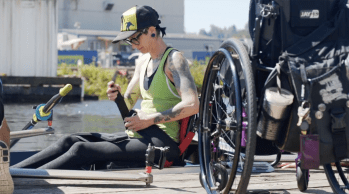