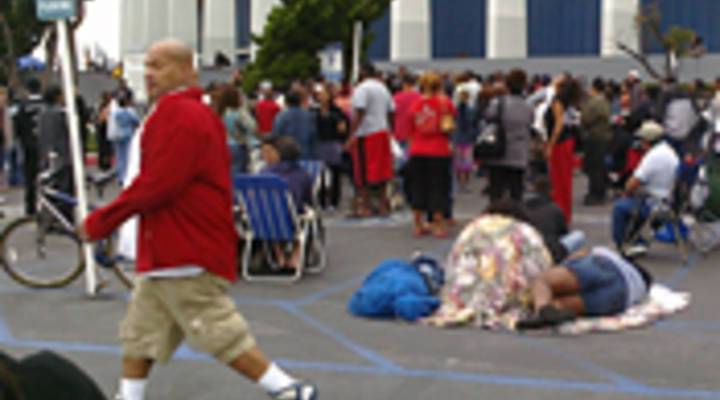 COPY
At the Forum, an old basketball arena in Inglewood, Calif. People started lining up at midnight on Tuesday for the free medical care offered by Remote Access Medical -- 1,500 people had signed up by 5 a.m. Stacey Vanek-Smith

At the Forum, an old basketball arena in Inglewood, Calif. People started lining up at midnight on Tuesday for the free medical care offered by Remote Access Medical -- 1,500 people had signed up by 5 a.m. Stacey Vanek-Smith
Listen Now

Kai Ryssdal: President Obama went to New Hampshire today. He was there for a town hall meeting on his health-care overhaul. Over on this side of the country, at an old basketball arena here in Los Angeles, there was a meeting of people without health insurance. Some of whom waited in line overnight to make sure they got in to see a doctor from the Remote Area Medical Volunteer Corps. Marketplace’s Stacey Vanek-Smith reports.

STACEY VANEK-SMITH: The sun is barely up at the Forum arena. In the parking lot, people are sprawled on picnic blankets, napping in pitched tents and standing in clusters. Tamika Scott holds an orange ticket in her hands and watches the gate.

SMITH: What time did you get here?

TAMIKA SCOTT: 2:19 a.m., and then we came out and walked up and got our tickets.

SMITH: And what are your numbers?

More than 45 million Americans don’t have health insurance. And the problem is especially serious among younger people, like 24-year old Cesiah Rojo. And her 19-year-old sister Adriana, who cracked her tooth a month ago.

The sisters say they’re both students and can’t afford health insurance. They hold their tickets, numbers 275 and 276, as a man with a bullhorn appears at the entrance to the arena.

Remote Area Medical was started to bring doctors to the Amazon, but the group now does much of its work in the U.S. Doctors and nurses from all over the country are here volunteering for the next week. Like retired nurse Jo Lane.

JO LANE: Mainly people haven’t had health care. There’s been hypertension is a big one and some diabetes. People need health care, so to me actually it’s an honor to be able to be part of RAM.

Lane says most people also need dental care and that isn’t even part of the health-reform debate in Washington. But it’s the priority for Adriana and Cesiah Rojo. They take another number and walk down near the old basketball court. Beds are lined up in rows with doctors rushing in every direction.

Their wait to see a dentist? About two-and-a-half hours.