Steve Chiotakis: Imagine living in a house rent or mortgage free. No property taxes either. The catch: You have to be good with a hammer. Maryland’s historic home curator program looks for elbow grease to pay the way. Cathy Duchamp reports.

Cathy Duchamp: Historic is the key word here. You do get a house for life. But you have to renovate it at your own expense. That can be a lot depending on the condition of the property.

BRIGITTE HISKY: This floor we could save. This one, we were just sanding and sanding and it was coming up in clumps in our hands.

That’s Brigitte Hisky. She’s reliving the renovation of the 1880s farmhouse that had become a rundown party pad. Now it’s the home where the Hiskys are raising two kids.

HISKY: It was all bad. My husband called it our own private crack house, because it was horrifying. But we loved it. We said we can do this, we were young, had a lot of energy, I guess.

The Hiskys were in their late 20s when they set out to restore this house. Its set in a pasture surrounded by woodlands in a state park outside Baltimore, Md. Sixteen years and $200,000 later.

HISKY: [But] I really feel like we resurrected something, brought something back.

There are a handful of historic home curator programs nationwide, most on the East Coast. The goal: to preserve structures on state land at no cost to taxpayers. Bruce Alexander runs Maryland’s program. He’s a landlord of 43 properties. Alexander says don’t apply if your main interest is to live rent-free.

As part of the application, would-be curators have to submit detailed restoration plans that include budgets. Banks generally don’t make construction loans for homes that can’t be sold. Which might explain the dip in interest Alexander’s seen in the program lately.

ALEXANDER: Perhaps the thought to invest this money in a property they don’t necessarily own is something people aren’t willing to do just yet.

So why did the Hiskys do it?

HISKY: We have other investments. I’m not saying they’re doing great in this market but like everyone else, it’s swinging. And here, this is just a dream.

A house in the country, that if the Hiskys fix and maintain, they can stay in forever. 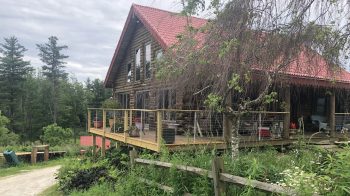