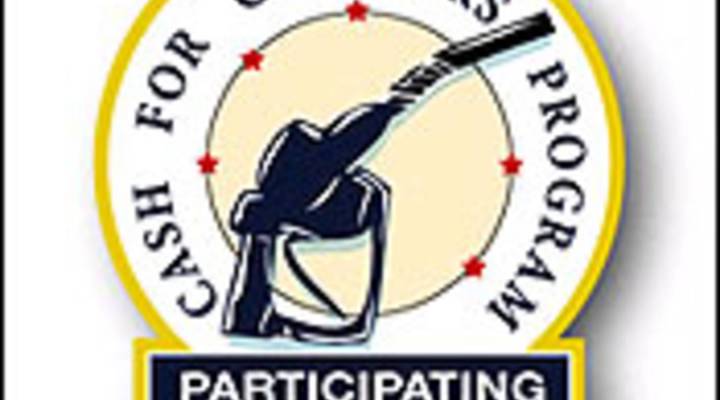 More investing in Cash For Clunkers?

COPY
Logo of the Cash For Clunkers Program cashforclunkersfacts.com

More investing in Cash For Clunkers?

Logo of the Cash For Clunkers Program cashforclunkersfacts.com
Listen Now

KAI RYSSDAL: Crazy as this sounds, there’s a government stimulus program that is so successful it’s actually running out of money. The billion dollar Cash for Clunkers plan offers as much as $4,500 to car owners who trade in their old gas hogs for more fuel-efficient models. But as Marketplace’s Stacey Vanek-Smith reports, there are some objections to adding more money to the pot.

Stacey Vanek-Smith: The Department of Transportation estimates dealers across the country have sold roughly 250,000 cars under the Cash for Clunkers program.

Don Mushin: Well it’s probably in 31 years, the most action at one time I’ve ever seen.

Don Mushin is the general manager at a Toyota dealership in Hollywood, Calif. He says he’s done 65 clunker deals — more than double normal sales — since the program went into effect on Monday.

That kind of stimulus is crucial for economic recovery says David Cole, with the Center for Automotive Research.

David Cole: People are scared, they’re not spending and this is the kind of thing that can create some momentum. It could be a significant accelerating factor in the economy.

But numbers can be deceiving, says Jeremy Anwyl, CEO of Edmunds.com.

Jeremy Anwyl: So there’s clearly extra traffic at dealerships, extra sales seem to be occurring, but the truth of the matter is that we’re really paying people to trade in clunkers that they would have traded in anyway over the summer. And we’re not creating a lot of new business; we’re just concentrating it over, in effect, this last week.

Anwyl says Cash for Clunkers has created a bubble in new car sales, one funded by taxpayer money. He says the program is clunky and costly.

Still, Mushin likes the program. He says the buzz is attracting non-clunker customers, too.