Kai Ryssdal: It’s my sad job to tell the kids who might be listening that school starts in like six weeks. That means back-to-school shopping season is already here. Walmart’s diving right in by beefing up its laptop computer offerings. Marketplace’s Rico Gagliano explains why.

RICO GAGLIANO: With the economy still a worry, consumers won’t be buying as much of, well, anything this back-to-school season. The one exception, according a National Federation of Retailers survey? Electronics. Americans plan to spend 11 percent more on them than last year. Analyst Steven Baker, of the NPD Group, isn’t surprised.

STEVEN BAKER: PC’s have maintained strong unit growth no matter what the overall economy has been. It’s something that’s a necessity for students.

Which is likely why Walmart, which for years has trailed competitors in the laptop market, has chosen *now to launch a media blitz. It’s hyping an exclusive Compaq Presario PC, available this Sunday. Pricetag: a mere $298 bucks. But Baker says the price isn’t actually anything new. And may not even be what consumers want.

BAKER: We’ve seen lots of $299 products, and while the price point is attractive, this time of year a lot of consumers are actually looking to spend a little bit more.

‘Cause many parents want to send their kids to college with the best possible computer. And students who are looking for a low-cost laptop aren’t looking for one like Walmart’s. At least, according to CNET.com editor-at-large Brian Cooley.

But analysts agree Walmart’s PR campaign is a signal to its competitors that in a PC market already locked in a price war, some big guns just rolled onto the battlefield. 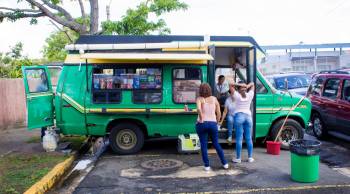