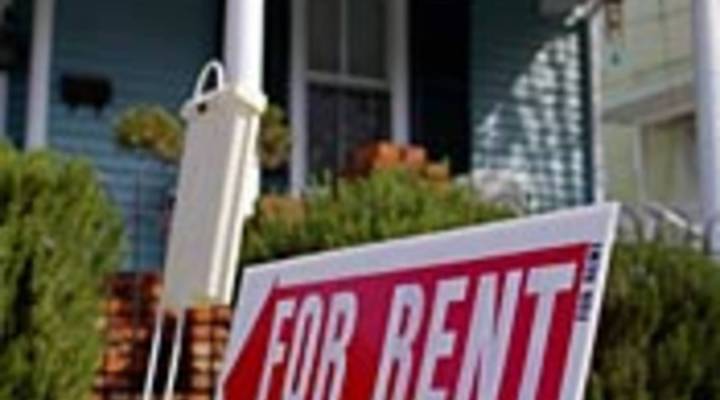 COPY
For Rent sign in front of house. iStockPhoto

For Rent sign in front of house. iStockPhoto
Listen Now

Tess Vigeland: So when does your house own you? It might be when you want to move, but you can’t because the old place won’t sell. And more owners are swapping “For Sale” signs to “For Rent.” In fact, one of them is Treasury Secretary Timothy Geithner. His New York home didn’t sell after several months. So if you are looking for a swank Tudor-style crash pad in Larchmont, New York, it’s yours for $7,500 a month.

We met with another family that’s become “accidental landlords.” Scott and Geri Okamoto found a great deal on a bigger house in their Pasadena, Calif. neighborhood called “Bungalow Heaven.”

I met them while they were packing and cleaning up for their new tenants.

Scott Okamoto: Welcome to our half empty house. This is the living room. This is about a 1,100 square foot bungalow. It’s a 1904 Craftsman.

Vigeland:What made you decide to move?

Vigeland: Well, should we head to the backyard here?

Scott: Sure if you can make your way through…

Scott: This is the deck that Geri designed.

Vigeland: Of course. So, you’re leaving for a bigger place. Did you try to sell this?

Scott: We didn’t even try really. We’ve seen our neighbors take about six months to a year to sell.

Geri: We thought that we could find someone to be able to lease our house out to cover the current mortgage and then we can wait for the market to return in order to sell our house at a higher value.

Vigeland: You’re about to become landlords. Is that something you ever particularly wanted to do?

Geri: It wasn’t in the master plan of how… We thought that this would be our starter home and we would live here for five years and then upgrade to a nicer home. And also at that time, the housing prices just got so out of reach that even if we sold this house at the highest part of the market, we wouldn’t’t be able to buy something any larger.

Vigeland: Well, what about some of the real practical stuff: You have to be ready to hire a plumber or be the plumber yourself, you know, things like that are still your responsible

Scott: Yeah, fortunately, I’m speaking, but my wife is the contractor of the family. She was like six months pregnant, sweating a pipe underneath the house. Most things we can fix ourselves

Vigeland: Yeah, but what if, say you’re on vacation?

Geri: Haven’t thought of that one.

Vigeland: Well, actually, they could.

Dave and Shandy Carlson are moving in to the Okamoto’s house this August and they joined in the conversation, in their backyard. They’re becoming accidental landlords as well.

Dave Carlson: We tried to put our house up on the market about two years ago. After about eight months, we decided to pull out and take the house off the market, because we knew we wouldn’t get what we wanted for it.

Two years later, Scott and Geri said their was, they were going to be looking for people to rent it. And we’d always loved the idea of moving to Pasadena, because it’s closer to our friends and our church.

Vigeland: So have you sold your house

Vigeland: So you’re renting out too?

Vigeland: So you are becoming renters and you are also going to be accidental landlords.

Vigeland: Is that part of the plan, Shandy?

Shandy: No, no. Nope, we hoped to sell our place and get into a new home, get a little bit more space, get a backyard. But this is working out well, because we’re getting a backyard, we’re getting a new space.

Vigeland: Do you feel like you’re ready to be landlords?

Dave: Yes and no. Being reluctant landlords, we’re both learning how to be landlords together.

I picked up the first form today at the Pasadena permit office, because there’s a occupancy requirement that the city of Pasadena requires you to have the property inspected.

Vigeland: If you’re going to rent it out?

Shandy: If you’re going to rent it out.

Vigeland: Just like if you were going to sell it.

Dave: So we’re hoping to get it all fixed up and cleaned so they can move in in August.

Vigeland: And Dave, you have someone set to move into your condo in August?

Dave: Yeah, towards the end of August. They’re students, so they’ll move in and we’ll move out. As far as we’re anticipating, it should be pretty smooth.

Dave: Hopefully we’ll still be smiling in a year’s time.

Vigeland: Well thanks for inviting us into your backyard and good luck.

Vigeland: Scott, Geri, Dave and Shandy do have a lot to learn, including the legal issues involved in this kind of deal.

WHAT TO KNOW WHEN RENTING OUT YOUR HOUSE

1. If you do become an accidental landlord, make sure you can afford to make mistakes. “Your local housing market could stumble, your house could sit vacant for months or you could get stuck with a renter who doesn’t pay up,” says Kate Ashford of Money Magazine. “If such unexpected bumps would deplete your savings, you’re probably better off staying out of the rental world.”

2. Know the risks. Make an appointment with a realtor and find out how much your home is worth today. Only rent if you’re confident the local housing market will improve. If you can’t reasonably expect your home’s value to increase, then there’s no reason to avoid selling.

3. Is it worth it? Make sure you can at least cover your expenses. Property managers can cost up to 10 percent of your rental income. You’ll also have to take out liability insurance. “You go from needing a homeowner’s policy to a landlord policy,” writes Danielle Babb in her book “The Accidental Landlord.” “In some areas, this actually lowers your payments, but in many cases it raises them. Run estimates with your insurance expert before you make the decision.”

4. Not everyone is cut out to be a landlord. If you’re already working a full-time job, go out of town often, or live in a different city than the property, you’ll need a manager. Remember, landlords don’t always get to set their own hours.

5. Find the right tenants. Those unexpected disturbances can be avoided if you find the ideal renter. “No tenant is better than a bad tenant,” advises Robert Irwin, author of “The Landlord’s Troubleshooter.”