Does securitization have a future?

Does securitization have a future?

Kai Ryssdal: J.P. Morgan Chase reported quarterly profits today. Much like Goldman Sachs earlier this week, it made a boatload of money. More than $2 billion April through June. J.P. Morgan’s been doing all right for itself. But the rest of the banking sector might not be so lucky come earnings time. In large part because of all those bad mortgage-backed securities they still have weighing down their balance sheets. CNBC correspondent David Faber has a new book out about how this financial crisis began. It’s called “And Then the Roof Caved In.” But I wanted to know what happens now that cave-in has already happened. What we do about all those toxic assets that, last we checked, are still on the books, right?

DAVID FABER: They are. A number of them. Not all of them. And it depends on the firm, in terms of how aggressively they have dealt with trying to eliminate them. We have seen plenty of them change hands. Where there was a buyer willing to pay 30 cents on the dollar. The key is whether there was a willing seller. So many of them do sit still, squarely on the balance sheet of many of the banks that were stupid enough to have been part of those securitizations and not have sold them completely. And there they may sit until some point in the future.

Ryssdal: Name some names for me, David.

FABER: Well, I think Goldman Sachs has been fairly aggressive about eliminating a lot of its exposure in that area. J.P. Morgan, again not a huge player. One of the key distinctions between J.P. Morgan and Bank of America or Citigroup, for example, or Merrill Lynch, was that they did not play as heavily in the CDO arena. In other words, those securities that were made up of securitizations of mortgages, so they could be fairly aggressive. Bank of America, Citigroup, perhaps Wells Fargo, perhaps not as aggressive as some of the others firms I mentioned.

Ryssdal: I wanted to ask you actually about those securities, and this entire process of securitization, the bundling and selling of these mortgages to spread that risk around, which is in great measure how the entire world got affected by what happened in this economy. We had Anna Schwartz on this program a number of months ago. A 93-year-old woman wrote a very famous book with Milton Friedman, as I’m sure you know, called “A Monetary History of the United States.” She said securitization was just a loser, that we shouldn’t allow it, that it only really worked for the people who are doing the securitizing . Is there a place for this buying and selling of these bonds in this economy today?

FABER: I would have to believe that there still is. That the power of securitization ultimately can be a positive one in that it creates markets and creates the ability for funding to be available in areas where it might not otherwise be. Mortgage-backed securities have been around for a very long period of time, and it ultimately proved to be quite a positive product in many ways, by providing a great deal of money to the ultimate providers of mortgages. Money that they could then use again to go out and sell more mortgages. But that being said, as so often seems to be the case on Wall Street, things become perverted beyond their original intent. And that unfortunately seems to have happened with securitization.

Ryssdal: As we approach the year-marker of Lehman Brothers going under. And Congress gets set, at some point I suppose, when it disposes of all its other business, to take up the issue of regulation of the financial industry. Are we coping with this crisis in a way that’s going to prevent it from happening again, or have we wasted the opportunity?

FABER: That, of course, is the key question that I don’t think any of us are in a position to fully answer. We’ll see whether the regulatory reform plans put in place, or potentially going to be put in place by the Obama administration, ultimately work. You know, when I look back on the crisis, I am forced to wonder whether in fact we would have suffered as grave a blow as many said we would if we had allowed some of these firms to ultimately fail. That’s a question we’ll never know the answer to. We have to take former Treasury Secretary Hank Paulson’s word that it would have been armageddon, and perhaps he was right.

Ryssdal: David Faber. He’s got a day job at CNBC. More to the point, though, he’s got a book out. It’s called “And Then the Roof Caved In.” David, thanks a lot.

FABER: Thanks for having me, Kai. 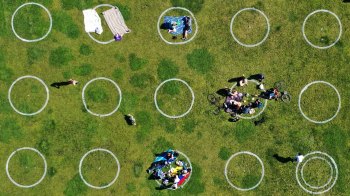