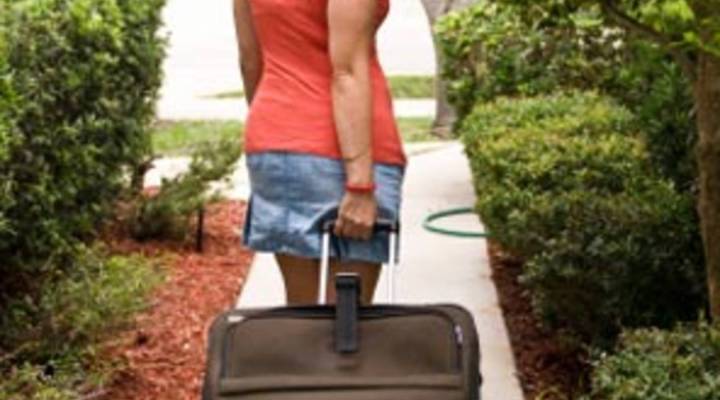 Tess Vigeland: It really is nice to know, isn’t it? That even 51-year-old U.S. senators sometimes need a little financial helping hand from the ‘rents.
This week Republican senator John Ensign acknowledged that the Bank of Mom and Dad “gifted” almost $100,000 to the family of his former mistress last year. On the bright side, he hasn’t asked to move back in with them. Yet.

But in this economy more and more parents and their adult children are facing that situation.

Beth Kobliner: I think you know.

Kobliner: You just know. I think so many people were hoping to make it on their own or they’re just out of school and they can’t make it. And if they’re lucky enough to have a situation where they feel like it’s tenable and they really can move back home with their parents, they have to, of course, talk to their parents about it. And it’s often a big shocker for the parents. They say, “You’re moving back home?”

Vigeland: How can parents tell when their kids really do need to move home and maybe when they’re just kind of thinking that might be easier for them?

Kobliner: For the most part, parents feel that they really want to help their kids. And I think that’s a good, certainly a parental instinct. I’m a parent myself. I know what that feels like. They sometimes do a disservice to their grown children.

One example is, I was recently in Boston. And they were sort of doing this thing where I was giving out personal finance advice on the street. And this woman came over to me, and she was so lovely, and she said, “You know, my son is 29 and he had a job, but it didn’t work out. Then he wanted to go to grad school, so I just let him move back home. And he’s home now actually and he’s not working. You know, I’m paying his credit card bills.”

Like what? He’s 29, he’s able-bodied. And we actually ended up calling him on his cellphone and just said, You’ve got to get out of bed and get a job.

Vigeland: Certainly, if a child is going to move back into the home, it’s going to affect the finances of mom and dad as well. How do you know where the line is on making sure that mom and dad aren’t sacrificing their own financial stability?

Kobliner: I think that cliche of “putting your oxygen mask on first, before putting it on your child” is really particularly poignant during these tough economic times. The number one thing a parent has to think about is, if they’re having their child move back home, they, the parent, will continue to do basics: like continue to contribute to their 401k, contribute to an IRA, continue to save. Because, I’ve met people who’ve said, “Well, we had to stop the 401k payments because I had to help my son, who’s 32.” You know, you can’t do that. Who’s going to help you, when you’re in your 60s or 70s or 80s and it’s going to fall back on your kid anyway, for the most part.

Vigeland: How do you decide things like whether to charge your kid rent? Whether to help them pay off their debts? Who pays electric and the other bills and that sort of thing?

Kobliner: Well, I think the first thing is to — it depends upon the situation, of course — if it’s someone who just graduated from college, hitting them with a rental bill at the end of the month would be a bit harsh. So maybe giving them some sort of grace period or talk about six months or a year or whatever you think is reasonable — We’re going to start charging you some sort of rent.

Vigeland: Is that as a lesson?

Kobliner: I think we value things when we pay for them more. I’ve had some parents tell me that they’ve charged their kids a nominal amount of rent and they were secretly taking that money and saving it, so when the kid was ready to move out, they said, “OK, here, you can use this as a security deposit.”

Vigeland: You do hear about situations, particularly in this economy, where people are moving back in with their parents and perhaps they even have children.

Kobliner: I think it makes it much harder when we’re talking about grandchildren moving back home. And I would say, that’s one clear-cut case — if you have a grown child who has children, and they are about to be foreclosed on their home and they’re getting into trouble — and you are able as a parent to help them financially, I feel like that is a time to step in and help them, so they don’t lose their home or lose a car that they use to get to work, in order to support the child.

So I think there are times, if they can afford it, it makes sense to rush in and to help them.

Vigeland: And if they can’t?

Kobliner: And if they can’t, if they feel that it’s a viable situation, that they have their child and their grandchild move back with them. But again, the same rules apply, when it comes toward either contributing some amount of rent or paying groceries, you know, “I need somebody to stay home, because we have to make sure the cable guy’s coming” or whatever it is, just really making sure it is a team effort. Because, I think it’s really infantilizing if you don’t do that. You know, helping the parent get back on his feet, because that’s the goal. The goal isn’t like, “OK, now we’re all going to live here for the next 20 years.” The goal is, “How do we help that grown-up person, the person in their 20s or 30s or 40s, how do we help them get back on their feet?”

Vigeland: Beth Kobliner. Thanks so much for joining us.

Kobliner: It’s been my pleasure.