A strange collection of items this morning. Among them: a well-known investor compares the stimulus package to a cocktail of Viagra and candy… one celebrated economist is paranoid, another is talking about brown manure instead of green shoots… and for just pennies a month, you can help save the life of a poor… journalist. Read on:

During the initial discussion of the stimulus, the debate was framed almost entirely as a debate between Obama and those who said the stimulus was too big; the voices of those saying it was too small were largely frozen out. And they still are — if it weren’t for my position on the Times op-ed page, there would be hardly any major outlet for Keynesian concerns…

And the voices calling for stronger stimulus are, may I say, sorta kinda respectable — several Nobelists in the bunch, plus a large fraction of the prominent economists who predicted the housing crash before it happened.

But somehow, the pro-stimulus people are unpersons. Who makes these decisions?

I have no idea what he’s talking about. This morning on ABC, none other than Warren Buffett was allowed to say that a second stimulus package might be necessary:

“Our first stimulus bill … was sort of like taking half a tablet of Viagra and having also a bunch of candy mixed in … as if everybody was putting in enough for their own constituents,” he said. “It doesn’t have really quite the wall that might have been anticipated there.”

At Forbes, Doctor Doom economist Nouriel Roubini will brighten your day with this assessment of the job market:

If you include discouraged workers and partially employed workers, the unemployment rate is already above 16%. If you consider also that temporary jobs are falling now quite sharply, labor market conditions are becoming worse and the average duration of unemployment now is at an all-time high. So people not only are losing jobs, but they’re finding it harder to find new jobs. So every element of the labor market is worsening.

He may well be right, but he certainly earns his nickname.

On PBS’s Lehrer NewsHour, Rod Beckstrom of the National Cyber Security Center explains this week’s computer attacks on US and South Korean government websites. South Korea believes North Korea is behind the malware, but Beckstrom says, whoever’s behind it, it’s not a very sophisticated effort:

In fact, this is like a scud missile attack. This is old technology that was used in this attack that’s been around since 2004. It could be as simple as somebody who wanted to make this political statement or harass these two countries and their governments and a few other private parties, just paid a cyber-mercenary.

I mean, there are mercenary hackers now who will take a cash payment. This may have only been a $10,000 investment or a $50,000 investment by someone who basically wanted to overload all the government mailboxes in these systems.

Meanwhile, NPR talks to former Homeland Security official Stewart Baker, who says the US had better get prepared for a major cyber attack:

“While I was at the department,” Baker recalls, “we discovered a flaw in the software of generators that are used for large power plants that actually could cause the generator to tear itself to pieces…

“I think if you talk to private industry or officials responsible for protecting our networks, they would all say they feel less secure now than they did five years ago,” Baker says.

As for the likelihood of a catastrophic cyberattack, Baker says the financial meltdown and Hurricane Katrina taught him this lesson: If something seems bound to happen sooner or later, eventually it will actually happen.

I also came across this — Slate has started a Sally Struthers-esque campaign to save newspapers: 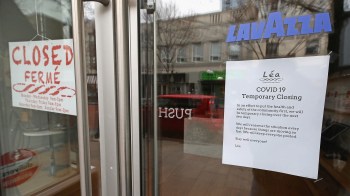