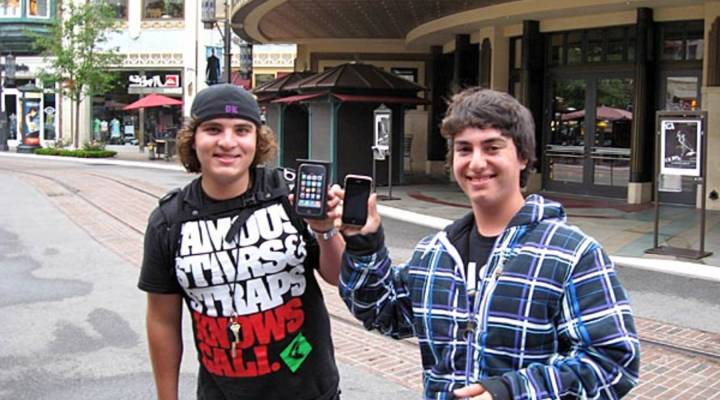 It’s the summer of the smartphone

COPY
Drake Kemper, left, and Noah Sall show off their new iPhones, fresh out of the box, outside the Apple Store at The Grove shopping center in Los Angeles. Stacey Vanek-Smith / Marketplace

It’s the summer of the smartphone

Drake Kemper, left, and Noah Sall show off their new iPhones, fresh out of the box, outside the Apple Store at The Grove shopping center in Los Angeles. Stacey Vanek-Smith / Marketplace
Listen Now

KAI RYSSDAL: The latest iPhone went on sale this morning. The top of the line version of the 3GS iPhone can be yours for $300, a little more than the equivalent of two shares of Apple stock at today’s close.

The iPhone is the leader of that pack by a mile, but Marketplace’s Stacey Vanek-Smith reports, even in the down economy, this is shaping up to be the summer of the smartphone.

Stacy Vanek-Smith: Eugene Watson has been waiting in front of an Apple Store in Los Angeles since 7 p.m. last night. Now it’s 7 a.m. and the doors finally open.

Eugene Watson: I can go in now? Hey! I love you guys!

The new iPhone 3GS isn’t the only smartphone consumers have been cheering for. The new Palm Pre was released earlier this month to great fanfare and T-Mobile’s new Sidekick hit the market in May.

Telecom industry analyst Jeff Kagan says only about 10 percent of cellphone users have a smartphone now, but…

Jeff Kagan: The traditional cellphone part of the industry is actually slowing. The smartphone segment is exploding.

Kagan says smartphone sales are growing 25 percent a year and will make up two-thirds of all new phone sales by the end of 2009.

But wait. Aren’t we in the middle of a recession? Smartphones can cost hundreds of dollars. And then there’s real expense: the service contract. Calls, texts, Internet, the latest apps can run more than $100 a month.

Josh Martin is a senior analyst with the Yankee Group. He says something’s got to give.

Josh Martin: Eventually consumers are going to have to say, I can’t spend $400, $500 a month supporting my devices.

iPhoneblog editor Rene Ritchie says people might scale back on downloading music, kill their landline, even cut back on their cable. But they will not do without their smartphones.

Rene Ritchie: I think they’re becoming increasingly a necessity. Now your instant messages, everything can be popping up at you 24 hours a day, seven days a week.

Ritchie says now that smart phones have made it possible, we’re all expected to be on call around the clock. Employers want to be able to reach their employees at will. Clients expect immediate attention. Friends feel snubbed if you don’t text them back, right now.

At the Apple Store in Los Angeles, Noah Sall and Drake Kemper emerge from the store with their new acquisitions.

Noah Sall: I’m so happy. This is as happy as I can get right now. I’m about the take the screen off. There we go.

Noah is barely out the door, but he has his phone synced up and he’s ready to let the world know.

Sall: I’m going to right now do my official Twitter. What should I type?

Drake Kemper: Type “First ever tweet from a 3GS.”

Kemper: We just made history right there.

But sometimes history has to leave a message.

Sall: Calling my dad with it. And he’s not going to pick up. First ever non-picked-up call. First ever voicemail from the 3G Speed.

At the Apple Store in Los Angeles, I’m Stacey Vanek-Smith for Marketplace.