Bill Radke: At this week’s Paris Air Show, the atmosphere has been mostly glum. But a highlight has been the debut of a new American plane: a heavily-armed crop duster. From the European Desk in London,
Stephen Beard reports.

Stephen Beard: The AT-802 crop-duster comes equipped with three-barrel machine guns, a pair of rocket launchers and a clutch of 500-pound bombs. It’s tempting to think that this bizarre contraption was inspired by the movies. Hitchcock, anyone?

Observer: That plane’s dusting crops where there ain’t no crops.

Remember the scene in North by Northwest, when Carey Grant comes under attack by a crop-duster? In reality, the AT-802 is designed to spray and destroy illegal drug plantations in Latin America. Such planes often have to dodge bullet and rocket-fire from drug traffickers.

Aviation commentator David Buik says the AT-802 has made a big impression in Paris:

David Buik: Le Bourget Air Show, which has been as dull as ditchwater this year obviously for economic reasons, was brightened up by this James Bond crop-dusting plane turned into a sort of rocket launcher.

No firm orders yet, but the makers, Air Tractor of the U.S., reckons it will sell for less than $5 million, half what its competitors charge for a comparable plane. 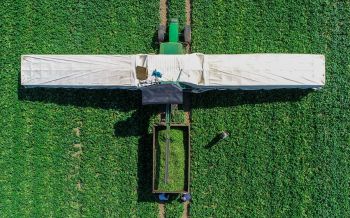 How photos taken from the sky are helping farmers