Kai Ryssdal: There are more signs of economic distress out there than anyone likes to count. Businesses closing. People losing their jobs. Consumers aren’t buying, so global trade is down. The World Trade Organization says overall world exports will shrink by about 9 percent this year.

And that is giving people living along a stretch of river in southwest England their own trade indicator. When business is bad, their quiet backwater becomes a parking place for empty, ocean-going cargo ships. From Cornwall, Marketplace’s Stephen Beard reports.

TOUR GUIDE: Good afternoon everybody. Welcome on board the Queen of the Fal.

STEPHEN BEARD: A group of tourists sets off on a scenic cruise, taking in the sights along the beautiful River Fal in Cornwall. The wooded hillsides, the castles, the creeks and the coves, and the 20,000 ton ocean-going freighters.

TOUR GUIDE: There you are, that’s the larger of the ships. She carries 1,200 cars.

Laid up along this short stretch of river, eight miles from the sea, there are 10 huge vessels: tankers, car carriers and container ships. The visitors’ reactions are mixed.

VISITOR: We’ve come for a little cruise up the River Fal today. I’m surprised to see these ships here. Not exactly a tourist attraction. A bit of an eyesore, really.

VISITOR: You don’t expect it. You don’t think the river could cope with such big vessels, yeah. And so many of them. That’s quite interesting to see.

Local mariner Peter Newman runs the scenic cruise. He lives on the river bank in a house called Smuggler’s Cottage. The shipowners pay him a fee to keep an eye on the 10 freighters and check their moorings.

PETER NEWMAN: We never get any ships breaking adrift or any problems dragging or anything.

BEARD: Or running aground?

NEWMAN: Or running aground. No.

The estuary is a ria, a drowned valley, one of the deepest in the country and well-protected from the elements. Newman says it’s an ideal place to park a giant ship.

NEWMAN: They’re very secure. And, of course, the owners know that. And they can sleep at night, you might say.

The River Fal has provided a lay-up for big ships for many years. Mooring fees are relatively inexpensive — around $1,000 a week. When trade is poor and cargoes are dwindling, it’s much cheaper to lay up in the Fal than keep a ship at sea with a full crew waiting for orders. Local harbormaster Andy Brigden says that makes the Fal a terrific economic indicator.

ANDY BRIGDEN: It’s the barometer of trade really. When the ships are no longer there, when that place is empty, then the world’s economy is doing very, very well. And it has been empty for a good 10 years.

The freighters suddenly began to arrive last October. There were 10 by December. Every day Brigden gets a request from another shipowner, but he’s adamant he doesn’t want to take any more vessels.

BRIGDEN: I think there would be quite a few people who would be upset if we packed the entire estuary full of ships. You know, I think we’ve got to be good neighbors, like any other harbor authority. Ten is quite enough for us. It’s doing wonders for our bank balance at the moment.

Local mariner Peter Newman is also doing nicely out of the freighters. They give him another talking point on his scenic trips down the river. He makes money occasionally ferrying people to and from the ships. He says he’ll be sorry to see them eventually weigh anchor and leave, but when they do, it will be a good sign for the rest of us. It will show the tide has turned for the global economy.

On the River Fal, in Cornwall, this is Stephen Beard for Marketplace. 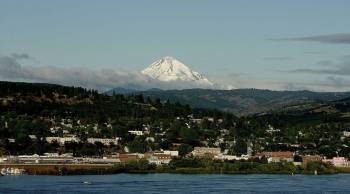