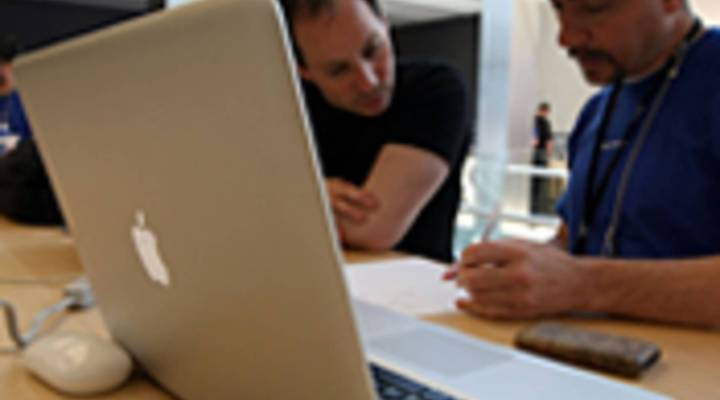 Steve Chiotakis: Apple’s been a busy little technological fruit lately. Just in the past week, it unveiled a faster iPhone, some amped-up laptops, and it also cut the price of some of its merchandise. If you’re an Apple user, it’s no surprise that Apple likes to surprise people with those kinds of announcements. But it can make for some frustrated costumers. Here’s Marketplace’s Stacey Vanek-Smith.

Stacey Vanek-Smith: My colleague Brendan hasn’t bought a new computer in six years. So he was very excited when his new MacBook came.

Brendan: It arrived on Friday — beautiful, aluminum-bodied laptop — snd then Monday come to work, reading the news and they just changed the price points on like all of their products. And so I was kind of bummed.

Brendan’s new computer now cost about $400 less than the week before. So he got on the phone — along with hundreds of other people.

Josh Martin: Apple’s toting the line between releasing innovative products and, you know, enticing consumers but also frustrating them at the same time.

Martin says all the calls and returns are costly for Apple, but the hype is worth it. Brendan was on hold for more than an hour — but he got Apple to refund the difference.