The dollar is losing some of its strength

The dollar is losing some of its strength

KAI RYSSDAL:Amid all the economic instability of the past year or so, the dollar is one of the thing that has been remarkably solid. Investors decided they could count on its relative safety when everything else was up in the air. This week though things started moving the other way. It cost a buck forty to buy one euro today. That’s a nickel more that you had to pay on Monday, astronomical change in the world of foreign exchange markets. And the dollar is on track for its biggest drop in months as Marketplace’s Jeremy Hobson reports from New York.

Jeremy Hobson: On the bright side, the dollar’s tumble could mean investors are more optimistic.

Wyss: The flight to safety that dominated the dollar’s strength over the last few months has now gone into reverse. People are going back to more normal behavior.

So that’s a good thing, right? Well, Wyss says “normal behavior” has its ups and downs.

HOBSON: So does that mean that we now have to worry about inflation since the dollar is weakening?

WYSS: Well we aren’t weakening that much. Remember, we’re still considerably stronger than we were a year ago.

And worries about inflation are not U.S.-dollar specific. Howard Wheeldon is senior strategist at BGC Partners in London. He doesn’t see any attractive currencies right now.

So if the dollar is weakening, doesn’t that mean U.S. goods are cheaper and we can sell more of them overseas? I asked Marc Chandler, author of the forthcoming book, “Making Sense of the Dollar.”

Marc Chandler: Some people will say that a weaker dollar will help boost exports. But the real key to helping exports is to have stronger world demand.

And Chandler says world demand is unlikely to pick up unless countries start taking monetary risks, printing money, like the U.S. has been doing for months. Of course, some argue it’s those very steps that are sending the dollar downward. 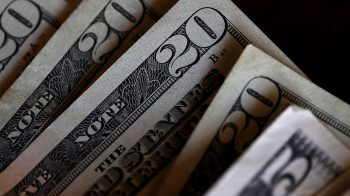