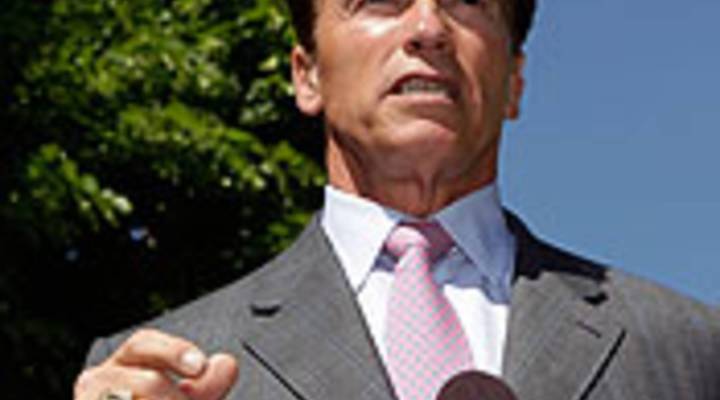 Is California too big to fail?

Is California too big to fail?

Kai Ryssdal: The debate about whether or not California’s too big to fail could actually be framed another way if you like: whether it’s too dysfunctional to stay out of default. Yesterday, voters here defeated a series of ballot measures that would have helped the state balance its completely out-of-balance budget.

A couple of months ago California’s deficit was $40 billion. After much, and I do mean much, back and forth between the governor and state lawmakers, they filled that hole. Only to tell voters two weeks later that they were $15 billion short again. After yesterday’s vote, the gap now looks like it’s going to be about $21 billion. With nearly half a million state and municipal workers, California is kind of like the General Motors of states. Which gets us back to the original question. Is it too big to… y’know? Marketplace’s Stacey Vanek-Smith reports.

STACEY VANEK-SMITH: Back during the Internet boom, cash was flowing and California was in a spending frenzy — cutting taxes, creating programs. Then the boom went bust. And state politicians have spent the last 10 years arguing over whether to plug the budget shortfall with higher taxes or program cuts. Yeah, 10 years. Susan Urahn is the managing director of the Pew Center on the States. She says when the recession hit, things got really bad.

SUSAN URAHN: You have the biggest budget gap right now, you have the fourth highest unemployment rate in the country. Not a lot of discipline on spending. Bad housing crisis.

And a system of ballot initiatives that has let small groups of voters and politicians paralyze California’s legislature. Enter a $20 billion budget shortfall.

URAHN: Whether it’s tax increases or cuts in programs that are really going to be to the bone, they will balance their budget.

That could mean a shorter school year, releasing 40,000 prisoners and slashing Medicaid. And that has some Californians talking about tapping everybody’s favorite new ATM — the U.S. Treasury. California economist Steven Levy.

STEVEN LEVY: We wouldn’t be asking for a bailout, as much as one of the federally guaranteed loans that the federal government is giving to virtually everybody now.

If that doesn’t happen, Levy says, Governor Schwarzenegger and lawmakers will somehow have to terminate 10 years of arguing and make some really hard decisions.

LEVY: If there were a terminator, then someone could come in and settle it.

A new Terminator debuts on the big screen this weekend. Unfortunately, he seems preoccupied with killer robots.