Kai Ryssdal: When you go to the grocery store, what do you do while the clerk is scanning whatever’s in your cart? I don’t really expect you to know. But chances are you’re perusing the tabloids, or telling the kids no, they can’t have candy. Something benign, in other words. But that doesn’t mean somebody’s not watching you. Because just as supermarkets installed those bar code scanners years ago to speed things up and be more efficient, now they’re turning to high tech once again to catch the stuff that doesn’t get scanned. Marketplace’s Jennifer Collins explains.

JENNIFER COLLINS: Many of us have had this experience. You go to the market. Get to the cashier with a cart full of stuff.

Head out the door, looking at your receipt, and you realize you didn’t pay for that bag of Doritos. Cashiers miss things like that all the time. Sometimes it’s intentional. Losses at the checkout counter add up to about $13 billion a year for U.S. stores. Most groceries have cameras that track cashiers. But who’s going to watch all that video?

Mark Gaudette tracks theft for Big Y, a chain of 58 grocery stores in New England. Instead of employing legions of video-watching security guards, he uses a software system called StopLift. The program monitors body motion in the videos and syncs it with the cash register. Gaudette says it catches unpaid items most of the time and then alerts store managers with the footage.

GAUDETTE: Notice that she lifted that package of meat up and over the scanner, so it wouldn’t scan.

Gaudette says sometimes cashiers are distracted. Other times, they’re giving things away to family or friends. Either way, it’s a loss to the store.

GAUDETTE: Everybody in the retail world’s trying to save every dollar. And in our industry where you know the profit margins are very small, averaging about 1.5 percent, we want to make sure we’re collecting for everything that’s going out the door.

Big Y is the first chain in the country to adopt the StopLift system. Safeway and others have installed it at some stores. Malay Kundu developed the software. He says he’s had a lot of inquiries lately.

MALAY KUNDU: And I think that’s directly tied to the downturn.

Kundu sells the software on a subscription basis. It can cost a midsized store about $2,000 a month. Before StopLift, Kundu studied advanced video technology at Harvard and MIT.

Similar surveillance systems are also being tested to look for potential terrorists or abandoned packages in large crowds. Some cities have bought the systems to watch tourist destinations. Food marketing expert Phil Lempert says this new security could actually pose a problem for stores by being too intrusive.

PHIL LEMPERT: How can we make sure that it’s just the cashier that’s being watched and not the customer? And will we have consumers who won’t shop at those stores just because of those surveillance cameras?

It could also be tough for a chain like Big Y to attract staff. Gaudette says they’ve fired a handful of checkers who weren’t scanning everything. He says for the most part, he uses the system to train employees.

Anne Marie Perez oversees the registers at a store in Springfield, Mass.

And maybe that’s all grocery stores are looking for. 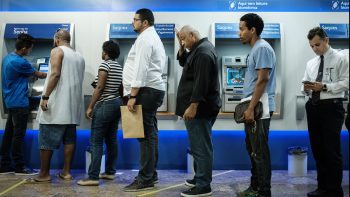