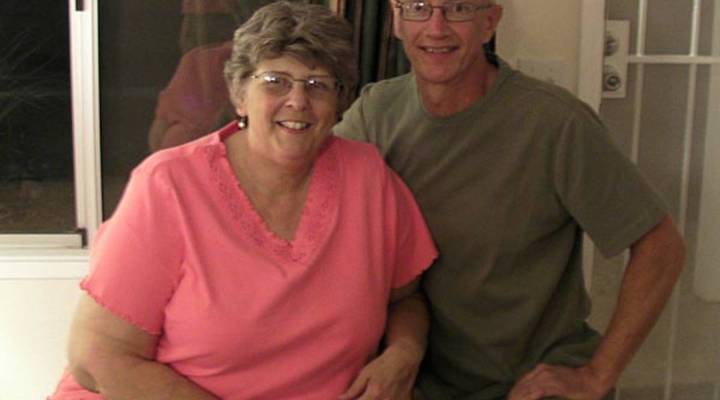 Not ready to retire in Sun City

Not ready to retire in Sun City

TESS VIGELAND: Did you catch that last quote in Stephen’s piece?
The German who said he doubts those new private pensions will be enough to retire on?

Sounds a lot like what you’ll hear in this country. In fact, a Gallup poll conducted in April found the majority of working Americans — 52 percent — doubt they’ll have enough money to retire in comfort.

Of course, as we told you earlier, that whole concept of the golden years is a fairly new one. And one we owe in large part to Sun City founder Del Webb. So let’s head back there for a look at how that vision is already changing.

BILL PEARSON: There are people moving into Sun City because it is cleaner, quieter, cheaper.

And not necessarily because of the idyllic image that was promoted in early marketing materials.

movie clip: You deserve a little piece and quiet. And of course, no kids, no schools. Easy on the taxes.

The NBA playoffs were on when we visited Craig and Pam MacDonald’s home in Sun City. It’s a two-bedroom, ranch-style house they bought in 2006 after moving from Michigan. The newest addition to the family greeted us with a few friendly licks. He’s a sleek greyhound who, it just so happens, retired from racing earlier this year.

VIGELAND: And what’s his name?

CRAIG: And so he’ll be excited here for about two minutes and then . . .

CRAIG: They call them 45 mile-an-hour couch potatoes. They lay around all day long.

Al the greyhound is the only retiree in the household. So what are the MacDonalds doing in Sun City?

OK, what does Craig mean by that? Well, basically, their house is here in Sun City but they don’t consider themselves part of the retirement community.

First of all, they’re still working. Pam is 57 and works at the Del Webb hospital. Craig is 58 and a youth minister for a local church.

CRAIG AT CHURCH: God is faithful. He’ll not let you be tempted beyond what you can bear. But when you are tempted, he’ll also provide a way out so you can . . .

A place like Sun City was never part of the MacDonalds’ retirement plan. Actually, they admit they never had much of a plan. But what they did imagine did not look at all like this.

Pam: Sometimes I miss the sound of children. So, you go into the Arby’s or McDonalds out here and there’s no children. And it’s just full of old people– of which we don’t feel we belong yet. But that’s because we’re still working.

VIGELAND: Craig, what about financially? Has it always been a part of your plan that eventually you would stop working?

Craig: Because I was in ministry, I never had a retirement plan. And she worked at a place where her retirement plan was really minimal. So the notion of golden years, it was going to be more like clay as opposed to golden. From a Biblical perspective, I don’t see anything in the Bible that says you get to a fixed age and life stops, and you get to do whatever you want from that point on.

So if it’s not a cushy retirement, what is it that’s brought Craig and Pam to Sun City?

CRAIG: We looked at buying a place in town where our kids live and our grandkids live. And we could have purchased a house for the same amount of money, maybe a little bit more. But out here, our property tax is $500 a year. Yeah, you got blue hairs with golf carts, but we’ll deal with that.

It’s not about the rec centers, or the walls, or a life of leisure. For the MacDonalds, it was all about affordability. And given their lack of financial planning, they’re not sure that will ever change.

Pam: Actually, I guess I’ve always thought I’d die with my boots on. So, I don’t know. Golden years? I don’t know.

Craig: If we do retire in the classic sense of the term, it will be because of an inheritance.

Vigeland: Do you consider the ability to retire part of the American Dream?

Craig: It has never been part of my dream. I don’t want to stop. I enjoy what I do.

And the more people like them who move in, the more the culture of this retirement community — and others like it — will change. So perhaps we’ll just have to retire the whole notion of retirement.

One thing Craig and Pam mentioned to us in passing was that their children are doing a lot more planning for the future than they ever did. But retirement is far from an obsession.

CRAIG: They’re insuring their financial security. But it’s not like there’s this carrot out there that they are looking forward to getting to.

So we’ve asked one of them to join us for the younger generation’s perspective.

Steve MacDonald is Craig and Pam’s eldest son. He’s 34, married, no kids, and lives in Goodyear, Ariz., about 25 miles from the folks.

Welcome to the program, Steve.

STEVE: Yes, thank you for the opportunity.

VIGELAND: We’ve just heard what your parents said about your retirement. What do you think of that?

STEVE: I think that’s pretty spot on. For us it’s a matter of making sure we have options available to us when we get to that age, but it’s not so much about a specific date or a specific goal — you know, an RV or a vacation home or anything like that. It’s far enough down the road. We just want to have as many options available to us as possible.

VIGELAND: Do you think that there’s been a shift in thinking about retirement?

STEVE: My generation has to face the fact that Social Security’s probably not going to be there for us, or in a very different format. And most of us aren’t on pensions at this age. So we don’t have a specific date that we can say, “At this point, I’m done, I’ve maxed out what I can do, and now it’s not worth it for me to work anymore.” So we just have to plod along as best we can now. Especially after the last couple of years, you have no idea what’s going to happen, even to what you have saved already. All it takes is for the stock market to tank and you could be set back another couple of years.

VIGELAND: When you talk about the financial part of preparing for retirement and how that is going to be so different for you than it was for your parents and, obviously, your grandparents, I wonder: What does retirement mean to you?

STEVE: Retirement is . . . I guess it’s basically a period, somewhere near the end of my life where either I’m physically or mentally unable to work or just at a point where it’s not a driving factor for me anymore. It’s a concept that’s out there but it’s not well-defined.

VIGELAND: What do you think of when you hear the phrase, “the golden years?”

STEVE: My parents. I don’t even picture that for myself. Golden years for me would be, I guess, probably in my 70s — 70s and on.

VIGELAND: So, not the kind of ideal — 65 — that has been for previous generations.

STEVE: No. You know what really opened our eyes is we took a class through the city of Goodyear to help us prepare for retirement and understand some of what we have to do. And one of the things that hit home there was that our average life expectancy is increasing. And so, if you plan on retiring at 55 or 60, you’d better have enough money that can last you 30 or 40 years.

VIGELAND: What, if anything, did you learn from your parents’ experience? They told us that they didn’t even really start thinking about retirement until they were in their 40s. And you’re in your 30s, already well ahead of the game. How did you decide that that was something you needed to start thinking about?

STEVE: A lot of it came from seeing my parents and when you’re a kid you think your parents are just going to keep working and doing what they do for forever. But as I become an adult and I see my parents — and I would love for my parents to be able to say, “You know, in five years we’re done working and we’re going to live life to its fullest and be able to go and do whatever we want” — and that option’s really not out there in front of them. So, I guess, mostly seeing that and knowing that I don’t want my wife and I to be in the same spot. . . . And, really for us at this point we’ve decided not to have kids so, while my parents can count on my brother and I to step in and take care of them, should the time ever come, we don’t have that option. So we have to be twice as careful in how we save for the future so that whatever comes up physically, we’re prepared for it.

VIGELAND: You know, one of the things that struck me when we met your parents in Sun City is that they don’t really buy into this whole notion of a retirement community, despite the fact that they live in one. How do you feel about a place like Sun City?

STEVE: There again, I agree with my parents. To me, it seems to be a little too homogenous. It’s . . . You walk out your front door, you can look left, right and in front of you and see the same guy in a different pair of plaid shorts, basically. I think I’d prefer to be in an area that’s somewhere like I live now. You can have a variety of people around you. It just seems a little too — not gated — but a little too unique and contrary to everything that’s going on around it.

VIGELAND: Well, Steve MacDonald, thank you so much for talking with us. It was a lot of fun to speak with your folks, and I’m glad that we got you as well.

STEVE: Great. I appreciate it.