Why we’re actually ‘In the Money’

Why we’re actually ‘In the Money’

Kai Ryssdal: If you’re a regular listener to this broadcast, you know the deal with how we do the stock market every day. We call it the Numbers. The markets go down, you hear “Stormy Weather.” They go up you hear “We’re in the Money.” Most of the time, it all works out fine. But nowadays, yeah, it sounds a little off-key to play that bouncy music when the market takes a momentary step forward, after having lost almost half its value. Why say “We’re in the Money” when we are so clearly not? Nate DiMeo explains the song actually fits right in with our current economic problems.

NATE DIMEO: It’s spring 1933. One in four American adults is looking for work. Franklin Roosevelt is up all hours ditching the gold standard, dotting I’s on the FDIC, crossing t’s on the Tennessee Valley Authority. And a fictional, down on his luck Broadway producer is short 15 grand.

Gold Diggers: I got the show, I got the music. I got the cast, I got the theater all raring to go, and it’s the old, old story: money.

That show gave us the song you hear on Marketplace on a good day.

PATRICIA HANSEN: “We’re in the Money” comes from a very entertaining film from 1933 called the “Gold Diggers of 1933.”

HANSEN: Ginger Rogers sings it in a lavish production number.

Hansen: She does one section in pig latin.

Gold Diggers of 1933 is the story of struggling chorus girls who scheme to land rich husbands but who learn that money doesn’t by love by the time the credits roll. Patricia Hansen says the picture was just the kind of diverting confection that Depression-weary moviegoers were looking for that spring. But even Ginger Roger’s toe-tapping show-stopper isn’t all sugar and showgirls.

Hansen: It has a very chipper beat to it, and it’s a fun number to watch, but there’s kind of sad reality behind it.

We’re in the Money: We never see a headline about breadlines today. And when we see the landlord we can look the guy right in the eye.

It’s a song for people who knew breadlines and hard times all too well says, UCLA sociologist William Roy. Despite its jaunty hummability, he says, “We’re in the Money” is defiant.

WILLIAM Roy: It’s not just an aspiration. It’s a statement: We’re in the money.

The movie came out as the Roosevelt administration came in. And its composers, Harry Warren and Al Dubin, may well have been taking a cue from the new president’s campaign.

William Roy says that “We’re in the Money” shares a willful suspension of disbelief with FDR’s theme song, “Happy Days Are Here Again.”

Roy: Happy days are here again. That sort of America, we can do it, we’re going to do it sort of thing. Stating the optimism, the determination that even though things are bad, we’re in the money, we’re going to be better.

But it’s lyrics go beyond the optimism of the campaign season, points out Patricia Hansen. Some of them read like an economic policy prescription.

Which suggests that perhaps Tim Geithner should rent “Gold Diggers of 1933.” He may just need a good melody and a couple of good rhymes for toxic asset and credit-default swap to get us back in the money. 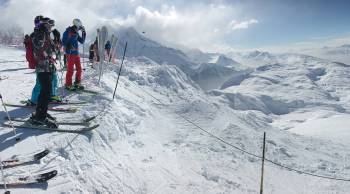