India loves cars too, but smaller ones

COPY
The Next American Dream

India loves cars too, but smaller ones

INTRODUCTION: For the last century, the American Dream has included the automobile — the mobility of the car, the independence, the pollution, the traffic, the suburbia.

This week, we’re bringing you a series called Next American Dream and we’re looking overseas. Dinesh Mohan is a transportation expert
at India’s Institute of Technology. Prof. Mohan
your country is beginning to embrace the car. What’s that doing to Indian life?

DINESH MOHAN: The embrace of the car dominates all town planning and upper-class thinking. And they think if you get a modern car into your society, all your problems are solved.

RADKE: By the way, I’m trying to picture this. Americans, we mostly hear about the Tata Nano. I have no idea how representative that is. Are all your cars itty bitty?

MOHAN: Our largest proportional car sold in India is the smallest car sold in the world, which is slightly bigger than the Nano.

RADKE: So how important is that? Does that mean that India, do you think, can avoid some of the downsides, the congestion and pollution? And even the psyche place that the car holds in the America, yeah, it’s like a house going down the road. Maybe it’s a very different relationship there.

MOHAN: No, I think it has to do with income. So, yes, the top 5 percent of the Indian population will behave like Americans. The next 10 to 15 percent would like to behave like them. And the other 70 percent don’t have a hope in hell to behave like Americans. But you know 10 percent is a very, very large amount — that’s 100 million. So to answer your question about which direction we’ll go in, as far as congestion is concerned, in the last 100 years that problem hasn’t been solved. And I don’t think it will be because car owners have a disease called “congestionitis.” And they’re not happy until they create congestion. And every time we reduce congestion, we increase pollution. Because you decrease congestion by making more roads.

RADKE: And pollution, where is that going?

MOHAN: See what’s happening is that because of our poverty most Indians don’t travel long distances. Lower middle class Indians or poor Indians live close to their work illegally. So they don’t need public transport, they don’t need fuel, they don’t pollute. It’s the middle class, upper middle class, because they’re highly educated, so they may or may not find work close to their home. Our large cities say, like New Delhi, is say, as large and its surroundings are as large as L.A. But we’re not like L.A. People don’t go from everywhere to everywhere. And so we all operate within 10 kilometers of our surroundings. We may be very large, but we don’t behave like American cities. And it’s not because we’re nicer people, it’s just that we are poorer.

RADKE: Professor Dinesh Mohan at the Indian Institute of Technology in New Delhi. Thank you. 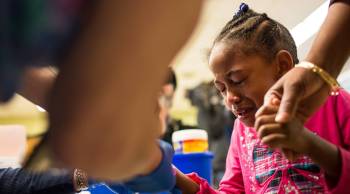