Will get naked for work

Will get naked for work

On an encouraging note, recessions do tend to inspire creativity, tenacity and a little bit of healthy (?) marble-losing. Case in point, out-of-work copywriter Lawson Clarke. He hasn’t given up on his chosen career. No, sir, he’s proud of his, uh, work.

You can check out Clarke’s website, malecopywriter.com, for yourself, but here’s how On the Media host Bob Garfield describes it in Ad Age:

The website isn’t especially robust or razzle-dazzle, but it does embrace a number of genuinely inspired elements, including the URL itself — which is paradoxically generic and revealing at the same time — and a wildly stupid/funny welcome page. This consists of a paunchy and hairy Clarke himself, sprawled nude on a bearskin rug, Ã  la Playgirl centerfold circa 1970, pursing his lips like Zoolander and fig-leafed by a circa-1970 portable TV.

I think he means a la Burt Reynolds in Cosmo, 1972, but you get the idea. Among Clarke’s advertising taglines:

“Scientists say drinking too much cider can cause brain damage. Sure, and the next thing you know, they’ll say it causes brain damage.” (Woodchuck Cider)

“Made for men. And the occasional cool girlfriend.” (Jack Daniels)

“We could go on and on about the health benefits of cranberries. Probably why we don’t get invited to parties anymore.” (Ocean Spray)

Clarke’s resume concludes: “Hope you enjoy my work. I love you.”

Love you too, man. 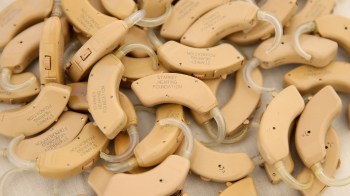