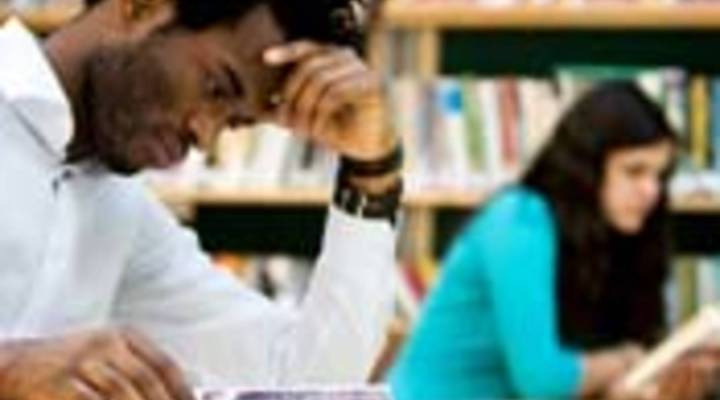 Tess Vigeland: For most high school seniors right now is a time of elation, relief, and hopefully, excitement over what comes next. The college acceptance envelopes arrived long ago. Now they just have to get through the last round of finals. But lurking in the background — or maybe in the foreground — is a ginormous question. How am I going to pay for school? Of course it’s a question college sophomores, juniors and seniors are asking as well. Borrowing for college has doubled over the last decade. Today about 14 percent of college students take out private loans. And they’re getting whacked with sky-high interest rates. Lauren Asher runs the Project for Student Debt and I asked her how the student loan equation has changed.

Lauren Asher: Most students with loans still have federal loans. The vast majority of student borrowers are using Stafford loans, which are the main type of federal loan, to help pay for college. But a disturbingly large portion of them are also taking out private loans. These are for-profit companies making loans. Sometimes colleges don’t even know that their students are borrowing these loans; they can be marketed directly to the consumer.

Vigeland: What’s behind this shift to private loans? Is it as simple as, you know, college costs are going up and federally backed loans have not kept up in terms of their availability?

Asher: Well, a lot of undergraduates with private loans are eligible for federal loans, but aren’t maxing out on federal loans or aren’t taking them at all. And that’s an indication of an information problem. Private loans were marketed very, very aggressively over the last decade, increasingly to undergraduates. If you ever turn on the television, for say, Comedy Central or MTV, you’d see these constant, very engaging ads about ‘$40,000 in cash today for college tomorrow! No complicated forms!’ Now, private loans should be an absolute last resort. Financial aid experts all agree that they should be avoided if at all possible because they’re really not a form of financial aid; they’re a very expensive and risky form of variable rate credit, more like a subprime loan or a credit card.

Vigeland: Yeah, I was just going to say, this reminds me completely of the entire subprime mortgage mess.

Asher: And like subprime mortgages, the worse your credit rating, the most desperately you need the money, or you think you need it, the higher the rates you’ll be charged and the worse the odds are that you’ll be able to afford to pay it back.

Asher: In almost all cases you have alternatives. Anyone who is qualified for a federal loan could get one. There’s no income cap. As long as your costs of going to college exceed the estimate that the government makes of what you can afford to pay, and that’s true for most people, you can get a federal loan.

Asher: What can be confusing is you get a financial aid offer from a college you want to go to, they’ve accepted you, you’re really excited. Your offer includes a bunch of different stuff that you may not have heard of before, and may not be very clearly explained. There might, for instance, be a Sallie Mae Stafford loan, and a Sallie Mae Signature loan. That Signature loan is actually a private loan. But it’s the same company. Some people think Sallie Mae’s still part of the government, even though it’s a for-profit company. You know, you might accept it because the school is suggesting it to you, so you assume it’s going to be a really good deal. The private loan industry has been — under-regulated would be a generous way to describe it. Sometimes you can’t even find out what rate you’ll really pay until you sign the promissory note.

Asher: The promotions will involve very prominently featured low rates, which turn out not to be the rate, but the lowest potential rate that you’d pay above an index like LIBOR or PRIME.

Vigeland: This is just like a credit card. Good grief!

Asher: Worse than credit cards because there haven’t been the same disclosure requirements.

Vigeland: And you can’t discharge it in bankruptcy.

Asher: You can’t discharge it in bankruptcy almost ever.

Vigeland: When you look at an average student coming out of school with $22,000, you know, the argument you always here is ‘Look, it’s an investment in your future. You’re going to be able to pay back this money, because you’re going to get a better salary because you have this college degree.’ Do you find that that is true?

Asher: There’s no doubt that a college degree is on average a very good investment. But every degree is different, and like any investment, there’s no guarantee of future returns. You might, very practically have decided to major in finance a few years ago because that’s where you could probably get a good paying job. And then you graduate in the middle of this economic crisis where the finance sector is contracting. Now over the long term having a college degree will always make it easier to get a good job. So you need to be very careful. If you’re going to a college that recommends to you that you take out a private loan so you can go there, think twice about whether going to that school is the right choice for you. You will have other options, both other borrowing options, most likely, and other college options that might be more affordable.

Vigeland: Lauren Asher runs the Project on Student Debt in Berkeley, Calif. Thank you so much for taking us through this today.