Bill Radke: We’ve all heard stories of the economic fallout prompting people to head back to college. At the same time, states are slashing their education budgets. That is a financial collision. Nowhere is it hitting harder than at America’s largest institution of higher education — Miami-Dade College. Marketplace’s Dan Grech reports.

Dan Grech: Miami-Dade College has absorbed as many new students in the past two years as the total student population of the University of Miami. State funding has not kept pace.

Eduardo Padron: Right now I have the equivalent of 15,000 students, for which we’re not getting a penny from the state.

That’s Eduardo Padron, president of Miami-Dade College. He’s had to cancel class sections, cut student services and postpone needed repairs. But there’s one thing he’s unwilling to do: with a third of his students living in poverty, he won’t jack up tuition.

Padron: Every time we raise tuition by one dollar, it’s the difference between putting food on the table and going to school.

With a total college enrollment of 170,000 students, the eight campuses are bursting at the seams.

Christian Moreno is president of the student government at the Kendall campus. It takes him 30 minutes to find parking before class. Students can wait up to four hours to see an advisor. Students with campus jobs now face layoffs.

Christian Moreno: Last year, they gave everybody in the school an agenda. It was a simple agenda, but it was tailored specifically for our campus. And now this year, it was a very limited supply, first come first served. There wasn’t enough for everybody.

Alan Berube is with the Brookings Institution. He says the federal stimulus sets aside a few billion for higher ed, but it won’t be enough to save community colleges.

Alan Berube: They have the infrastructure to educate a population of, say, 20,000 students, and they’re trying to cram 40,000 students into that same space. There’s got to be a breaking point somewhere.

Padron says the breaking point has arrived. Miami-Dade may soon have to break its unwritten contract with the community: never to turn anyone away.

Padron: This is the work force of the future. And if we fail to train them, who’s going to pay Social Security taxes so all of us can retire? Who’s going to provide the well-trained labor force to be competitive with China and India and Europe? Who’s going to lead this nation?

Padron is now pushing for a half-penny tax in the county, so he can start building more classrooms. 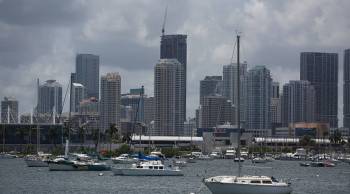 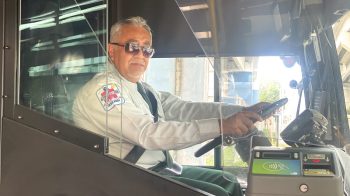