It looks like House Speaker Nancy Pelosi wants to push for a comprehensive investigation of the financial crisis. If so, the hearings could be reminiscent to the Pecora Commission, which looked into the abuses that led up to the stock market crash of 1929 and the Great Depression.

Here’s how a Time Magazine story described the hearings when it was the turn for the House of Morgan to be grilled:

Ferdinand Pecora, onetime Sicilian immigrant, now a grey-haired, swarthy Manhattan lawyer, was cicerone–paid $255 a month for the job. A handful of U. S. Senators were official sightseers. The world trooped in after them. After that visit, men could make out a fairly complete picture of the business of Morgan:

Here is a Time Magazine cover of Pecora:

But such pleasantries were soon over, when Mr. Pecora, abetted by Michigan’s Senator Couzens brought the question around to income taxes and the $21,000,000 loss of 1930-1931. At no time did Lawyer Pecora openly point to any impropriety in the action of Banker Morgan or his partners but evidently aware of the impression the questions & answers would make on the courtroom crowd and in next days’ headlines, he assumed his best prosecuting attorney manner.

And so on until Senator Glass angrily pounded the table and exclaimed: ”I can see no use in this badgering of Mr. Morgan!”

The crowd loved it, loved the whole Big Show

The hearings were held from 1932 to 1934. According to a brief summary by the Federal Reserve, the hearings investigated stock exchange practices and their effect on American commerce, the national banking system, and the government securities market. They also addressed issues of tax evasion and avoidance. The record of the hearings includes more than 12,000 printed pages with more than 1,000 exhibits received in evidence. The work of this committee set the stage for the Banking Act of 1933, the Securities Act of 1933, and the Securities Exchange Act of 1934.

Economist Ed Yardeni points out that you can read the transcripts here. 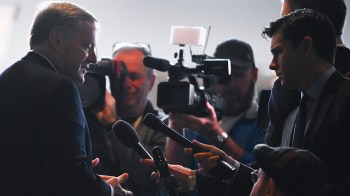 Will TV networks cash in on impeachment?