The downside of upper-class air travel

The downside of upper-class air travel

BOB MOON: Have you tried talking the boss into a first-class upgrade lately? Apparently it’s a travel perk few can afford these days. United Airlines reports a $382 million loss in the first quarter of the year, and it blames much of that on a 30 percent drop in first- and business-class travel. Low-cost carriers like Southwest, on the other hand, don’t have first class, and that’s helped them somewhat during this recession.

But as Marketplace’s Jeremy Hobson reports, the big legacy carriers like American, Delta and United are now feeling the downside of upper-class travel.

JEREMY HOBSON: A typical first-class cabin only has about 10 percent of a flight’s seats. But a full first class can bring in 40 percent of the flight’s ticket revenue.

MATTHEW JACOB: In times of strong demand, the first-class and business-class tickets do drive a disproportionate amount of revenues and profits for the airlines.

Ernest Arvai is a veteran airline consultant. He says some carriers are already dropping first-class cabins in favor of an expanded business class.

ERNEST ARVAI: For most people, business class is the new first class. It’s got really all of the amenities, in fact more amenities than first class used to have.

But business class isn’t immune from recessions either. In the last several years, three all-business-class airlines started service from the U.S. to London. All three went out of business.

WEBSTER O’BRIEN: Different carriers focus on different segments of the market. We’ve actually watched a number of international long-haul carriers try to enter in that segment alone, only to find that it’s not sustainable.

O’Brien says things may look bleak for first class right now. But there will always be some demand for a premium product.

OBRIEN: You know, is Tiffany’s dead? Is Bulgari dead? Is Rolls Royce dead? No. And have they been around for a long time? Have they been through multiple cycles? Yes.

He says this is just the latest chapter in the never-ending struggle to get the airline’s cabin balance right. 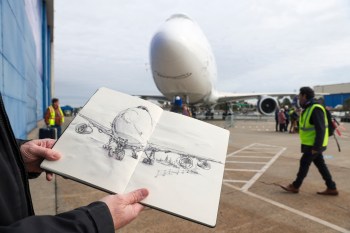 Adieu to the Boeing 747, the first jumbo jet