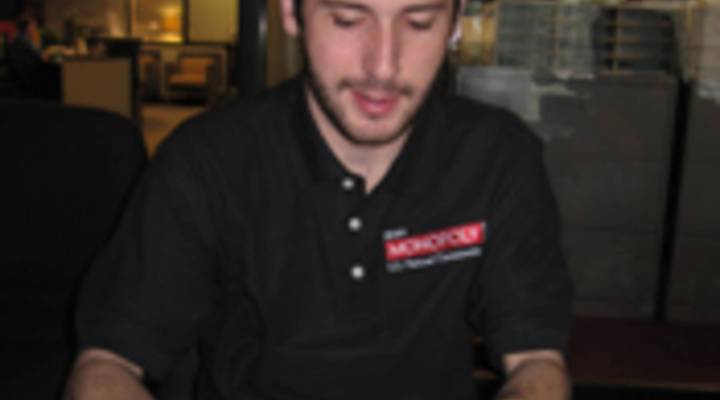 Tess Vigeland: So I was having dinner a recently with a cousin and his friend here in Los Angeles, and his friend casually mentioned that he was going to the National Monopoly Championships in Washington D.C. this week — as a player. I thought, Monopoly? The game about the buying and selling of property? The game about banking and taxes and mortgages and a little bailout plan called “Pass Go and Collect $200.” Now that’s a game for our times. Want to play?

Brian Boles: This is just the vintage edition that I like to play with. It’s No. 9, from about 1952.

Brian Boles is that friend of my cousin.

Boles: What I like most about it is it has wood houses and hotels, as opposed to the newer editions that have the plastic ones. They have a little more weight and feel to them.

Boles is 25 years old, lives in L.A. and brought two vintage Monopoly boards to our studios from his collection of about 300.

Boles: The race car. That’s one of the most popular.

Vigeland: Do we think this is an American made car? Should I use that while we’re playing just in support of Detroit?

He suggested we role the dice to see who got what token. He won, and he chose the car. Boles is one of 28 players who will compete in the national tournament on Tuesday and Wednesday. As he used me for target practice, I asked what drew him to this particular game.

Boles: The earliest memory I have of playing is sitting around my dad and my cousins and them teaching me all the ways of the game. I think eventually, at some point, it was because they wanted to be able to teach me a lesson on how to get beat at board games, which now I’m giving them lessons on how to get beat.

Boles: So it’s worked out nicely in my favor.

Boles: I’ll start off. Six. I will purchase Oriental Avenue for $100.

Boles wasn’t quite biting on my stretch of an idea that the game is somehow relevant to our current real estate crisis. With one exception:

Boles: People have always commented on how the properties have never actually changed in value since 1935, when the game started. Everybody says, $400 for Boardwalk, that’s a bargain these days. And you think, yeah you’re right, you probably can’t.

Boles: An excellent choice of purchase.

Boles: Because St. Charles is one of the cards that has a Chance Card that says “Advance to St. Charles Place.”

More rent payments for me to collect. Speaking of chance, I decided to take one with another Monopoly man. Phil Orbanes is a former Parker Brothers executive. He wrote the definitive history of the game in his book “Monopoly: The World’s Most Famous Game–And How It Got That Way.” And he says there are plenty of lessons to learn as you make your way around the board. Especially when it comes to real estate.

Orbanes: It’s not just a matter of excitingly going and buying things for the sake of buying, but knowing where to put your money to protect you, you know, or force the opportunity for you to reach your goal.

Vigeland: And at least we’re not looking at any kind of funky mortgages in this game. No ARMs right?

Orbanes: No. If anything this game teaches that while mortgaging is essential at times, that it is to be avoided if you can do so.

Boles: You can have it.

Vigeland: So what do I do?

Boles: You’re going to have to mortgage something.

So multiple lessons here: Don’t go and buy things just for the sake of buying, as Orbanes said. Always know how much money you have in the bank. And don’t mortgage a utility, as I was getting ready to do, if you already own both. There’s some kind of strategy there.

We had to end our game before it was over, you know, go back to work. But turns out, I did just fine.

Boles: See you already own one, two, three, four, five different colored properties. Now all you need is a green, a red, and a dark purple, and then you’ll have what’s called a “rainbow monopoly.”

And I’m sure that’s exactly what would have happened. By the way, the winner this week will get $20,580 in prize money — a real version of the amount available in a Monopoly game. They’ll also go to the world championships in Vegas in October. Check our website later this week to find out how Brian does. And while you’re there, you can peruse some photos of our Monopoly match.