KAI RYSSDAL: The government of Japan announced another stimulus package today. If parliament agrees, it will be the third time Tokyo’s tried to prime the economic pump.

Meanwhile, leaders of 16 Asian nations, including Japan, are meeting in Thailand today. They’re trying to put the finishing touches on a plan to restore financial stability and economic growth in the region. There is some irony in their choice of venue. Southeast Asia was the epicenter of another financial crisis that crashed through world markets just over a decade ago. And as Marketplace’s Jeremy Hobson reports, it all started in Bangkok.

HOT HIT MUSIC: One night in Bangkok and the world’s your oyster.

Jeremy Hobson: Just like American homeowners thought the world was their oyster during the housing boom. A dozen years ago it was currency traders getting their kicks from exponential growth in Southeast Asia. The natives didn’t mind. Their currencies were worth so much, they were spending like crazy. But then, it all came crashing down, starting with a collapse of the Thai Baht in the summer of 1997.

Julie MCCARTHY: The tumbling Thai baht took other currencies with it in a domino-like drop.

George Lewinsky: Some people are calling it the Asian contagion. Currency and stock crises in Southeast Asia again shook markets all over the world.

The crash came after Thailand could no longer afford to keep its currency pegged to the dollar. Central bankers let it float, but it plunged instead. Leaving it at the mercy of speculators. Johs Worsoe found himself at the center of the storm.

Johs Worsoe: I was in the currency trading business myself in Europe at that time.

He’s now head of global and wealth Markets at Union Bank of California.

WORSOE: You had significant leveraged currency speculation and as these currencies became more and more convertible and freely traded, you saw essentially each of these Asian countries being, their currencies being attacked one by one.

In other words, the investors who had given were now taking away.
It was like a run on the bank, but instead of pulling their cash out of Jimmy Stewart’s savings and loan, they were pulling out of countries.

Raghuram Rajan: And very soon, you saw one Asian economy after another collapse.

That’s Raghuram Rajan, a professor at the University of Chicago’s Booth School of Business. He’s a former chief economist for the International Monetary Fund. He says in this latest crisis it was banks that collapsed one after the other. Banks so heavily leveraged and interlinked that all it took was a little push to put the whole system on the brink.

Johs Worsoe says there’s a lesson we should have learned long ago, and we haven’t learned yet.

WORSOE: I think the key is to make sure that you don’t find yourself in a bubble. And that can be as a country or as a company.

OK, but that’s sort of like telling a man who’s having a heart attack to exercise more and eat less. Wasn’t there a pill the Asian countries took or something — something we could take now?

WORSOE: Back then, at least we could isolate it, we could throw IMF in there. And address the issue essentially country by country. Well it’s a very different situation we have today.

Rajan says the Asian countries were able to take advantage of their extremely cheap currencies post-crisis. Rich countries like the U.S. bought Asian goods at incredible discounts, and reinvigorated their economies. But there’s no one big enough to buy the U.S. out of the trouble it’s in.

And worse still, he says, we have no idea whether or not we’re at the bottom of the pit yet. 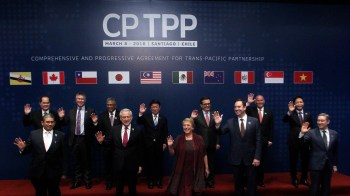