Steve Chiotakis: We’ve heard it time and time again: this recession is unlike any other. Yet the temptation to compare it to past downturns, especially that one in the 30’s, has proved difficult for pundits and policymakers to resist. Commentator Will Wilkinson thinks if we want to look for precedents, it’s time to look beyond our borders.

Will Wilkinson: Our current economic downturn has brought to life old debates about the the Great Depression: What got us into it and what got us out of it? The role of the New Deal looms large. Did it deepen the Depression, as many economic historians now say? Or did it save capitalism from itself, like I learned in 6th grade social studies?

Let me tell you, people get really heated about this question. But hold on: Is this debate really relevant to our current crisis?

The U.S. 80 years ago is a strange and faraway land. When the Great Depression hit, there was no Social Security, there was no unemployment insurance, and Jim Crow was in full effect. There was no such thing as a mortgage-backed security, a collateralized debt obligation or a credit default swap. U.S. currency was backed by gold.

Financial systems all over the world have undergone a series of deep changes since the 1930’s. Trying to draw current policy lessons from the Great Depression is sort of like coming up with a new strategy for the war in Afghanistan by studying the Normandy Invasion.

Our pundits’ obsession with the Depression and the New Deal represents an all-too-typical American exceptionalism, as if only our history really matters. But an apt comparison requires similar institutions, not the same flag.

If we’re going to fight over history, let’s fight over the recent history of the 1990’s Japanese and Swedish banking crises. Let’s talk about the financial collapse of Argentina, from which it has only recently emerged. All those economies were more like America’s is now than America’s was way back when my grandpa was playing football in a sweater and a leather helmet.

So what lessons should we draw from the rather more germane recent experiences of countries with similar economies? Truth is, I don’t know. Maybe I should work harder to find out. And maybe American opinion-makers should spend less time fighting over FDR’s enduring legacy and more time learning from the rest of the world.

Chiotakis: Will Wilkinson is a fellow at the Cato Institute. 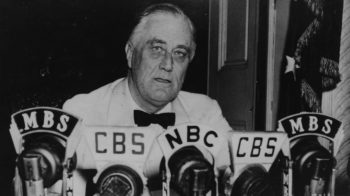