Kai Ryssdal: Airlines treated their customers better last year. Some private researchers said so today. Fewer late flights and fewer people bumped off them. Fewer complaints about lost luggage and other hassles. Of course, fewer people flew at all, too. That’s probably one reason the airlines managed to do better. Americans are expected to travel less this year too, as we think twice before spending money. That said though, everybody needs a break now and then. So to get some sense of how the summer vacation season is shaping up, we sent Marketplace’s Sean Cole out of the office.

SEAN COLE: This is why my job is awesome.

COLE: Wow, this is just beautiful.

MARK DOWNEY: These buildings all down here on the ocean.

I get to interview Mark Downey on the balcony of his hotel resort in Dennis Port, Cape Cod, while gazing out at the ocean on a sunny day. It’s two pretty basic hotels: The Corsair and The Cross Rip, $200 or $300 a night in season. So cheaper than a lot of Cape vacations.

DOWNEY: We don’t say cheaper, by the way, we say cost effective, efficient. There are many other words you can use.

Downey says they did really well last summer when everyone was driving instead of flying. And he’s not expecting a bad summer this year; he’s just not expecting a great summer.

His advanced booking numbers were off at the beginning of the year, but they’re bouncing back now. Same goes for the Cape Codder Resort a few towns away. It’s little higher end. Bill Catania showed me around.

COLE: Uh-huh. What is a wave pool?

Catania runs a bunch of inns and restaurants in the area, and like everyone else I talked to, he said people are waiting longer before booking their vacations. It reminds him of the months after 9/11 when people didn’t want to make any plans.

CATANIA: You know and then as time went on, they realized the sky’s not falling. There is going to be a tomorrow. It’s OK to still live.

But it’s tough to get a fix on how much living we’re all going to do this summer. Last July a survey by Allstate insurance said consumers were going to cut their 2009 travel spending almost in half. But that was last July.

WENDY NORTHCROSS: You’re primary indicator that you would look at to predict what this summer’s gonna look like would be the consumer-confidence index.

Wendy Northcross heads up The Cape Cod Chamber of Commerce. She says the consumer-confidence index is so low right now she can barely look at it.

NORTHCROSS: And it belies what I’m hearing from my members that advanced bookings are actually pretty good. Because I think people are going to shift to a less flashy vacation, an affordable vacation, one that’s nearby.

Maybe a single-family house near the beach instead of a resort. And if anybody knows about that market it’s Jeff Talmadge.

JEFF TALMADGE: Let me check it, just so we get this right.

He and his wife Joan run the Web site weneedavacation.com. It’s a listing service for single-family house rentals. Jeff says the homeowners will usually start lowering their prices in June if they’re not fully booked.

For a while one client was offering an early-bird discount. Her ad says:

Her name’s Nickie Lisella. She rents out a four-bedroom house for $2250 a week in season. But she just dropped the price to $1950 because she only has one week of the summer rented. There’s a lot of competition out there she says.

LISELLA: This woman called me the other day and she said, “OK, I’ll let you know we’re looking at a few places. I’ll get back to you.”

So, in the end, it doesn’t seem that we’re skipping vacations as much as spending less on them. Another thing, Mark Downey, the resort owner, told me is that he’s getting calls from people who usually book flashier getaways on the Cape.

DOWNEY: So those guests are calling me to say, “Hey, we’ve always stayed on the ocean, it’s just too pricey here. We’d like to come stay in your place. You offer similar things, you’re just not as big.”

COLE: So you’re a beneficiary actually of the recession in that way.

And if Marketplace keeps sending me out to do seaside interviews like this one, I won’t need a vacation. 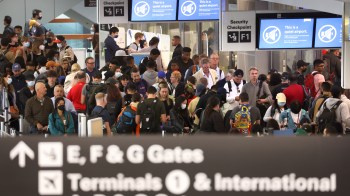