BOB MOON: It’s not every day that a corporate executive heads to Washington, makes a public appearance before Congress and says, “Regulate my industry, please.” Well, that’s what David MacKay did today. He runs a company you may have heard of:
Kellogg’s. Along with a lot of other companies — not to mention consumers — the big food maker has been burned by the recent salmonella outbreak in peanuts. The Kellogg’s CEO has decided the country’s food safety system is broken and today he told Congress so. Marketplace’s Steve Henn has the story.

STEVE HENN: Peanut butter sales have plummeted as parents across the country pull peanut butter cookies, and PB&J Sandwiches out of their kids lunches.

SARAH KLEIN: You know, unfortunately, I am still not confident about the safety of peanut products.

Sarah Klein is a staff attorney at the Center for Science in the Public Interest.

KLEIN: This outbreak continues to grow. We’ve seen over 2,000 products that have been recalled and the list grows every day.

Kellogg’s had to recall 7 million cases of tainted cookies. And today the company’s CEO David MacKay told Congress it cost the company a bundle.

DAVID MACKAY: Currently, our estimation is between $65 and $70 million.

MacKay said the country’s food safety system is broken. Right now companies like Kellogg’s require suppliers to conduct safety audits and send the results. But Kellogg’s uses 7000 ingredients every year and buys from 3000 different firms. Since the salmonella outbreak, it, and most other big food buyers, have done their own audits. Their suppliers…

MACKAY: They’re running so many audits, they actually can’t produce the product that we all want. So if we could get great standards, we could all rely on, it would be better for everyone.

Sarah Klein at the Center for Science in the Public Interest couldn’t be happier.

KLEIN: A lot of the things that Kellogg’s proposed today are things we have been supporting for a long time.

MacKay asked Congress to create one agency responsible for regulating all foods, require annual federal inspections and ensure that this new agency has the budget it needs. 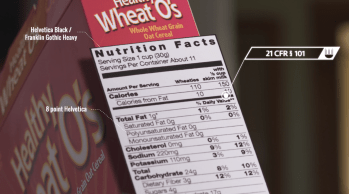 Video: A day in the life, surrounded by federal regulations