Bob Moon: It helps to be a big cheese if you hope to have financial influence these days. And here’s a case in point: The Italian government came to the rescue recently when the country’s Parmesan cheese makers took a sales hit. Officials decided to buy up hundreds of thousands of pounds, and then give it away to charity. Which goes to show the kind of value Italians put on their Parmesan. In fact, there’s a bank in northern Italy that sees stockpiling the cheese as a way to hedge against losses.

Megan Williams reports on the “big wheels” behind the region’s money-lending.

MEGAN WILLIAMS: The Credem bank in the tiny northern Italian town of Castelfranco Emilio. It could pass for any branch of any bank, any place in the world.

Friendly, small and bustling. But what makes this bank different is what’s in the warehouse out back. A hundred and fifty thousand wheels of Parmesan cheese, with another 300,000 stored nearby. Each worth up to $3,000. It’s collateral for loans made to producers of the world famous Parmigiano-Reggiano Parmesan cheese. Bank manager Paolo Benni says the system’s as safe as it gets.

PAOLO BENNI: [translated from Italian] Because we house the collateral here, it means that our risk is very small. So the interest we charge to the Parmesan producers is lower. If the producers cannot pay back the loan, we can simply sell the cheese we have in storage and recoup our loss.

In the warehouse, cheese the size of tractor wheels is stacked 20 shelves high, row after row. The bank doesn’t just store it, though, it inspects it as well, and downgrades any cheese that doesn’t meet the strict standards.

MICHELE ABBIZZANI: The point is that all the cheese must be aged minimum 12 months.

Nearby is Andrea Bruccone, the bank’s expert on the aging and classification of Parmesan. He stands over a huge wheel of cheese wielding a little steel hammer. As he taps, Bruccone listens intently for air bubbles or rot caused by mold.

Megan Williams: So this is a defective Parmesan wheel . . .

This wheel flunks the test, so Bruccone lifts it onto a round platform and pushes a button. Steel forks dig into the sides of the cheese and scrape off the Parmiggiano-Reggiano imprint. It’ll be sold as ordinary table cheese at a 15 percent discount.

Williams: The cheese is spinning around on a wheel. It looks like a potter’s wheel.

Like so many other gourmet foods, Parmesan’s sales are hurting with the economic crisis. And the Italian government has had to help out by buying up 150,000 wheels. But bank manager Benni says by keeping its eyes — and ears — on the collateral, the bank can avoid the kind of risks that have brought other banks to the point of collapse. And, just in case you were wondering, there are no derivatives on Parmesan.

BENNI: [translated from Italian] No, thank goodness. No Parmesan derivatives. At least we don’t have that problem! 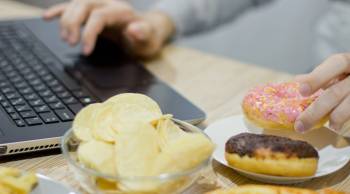