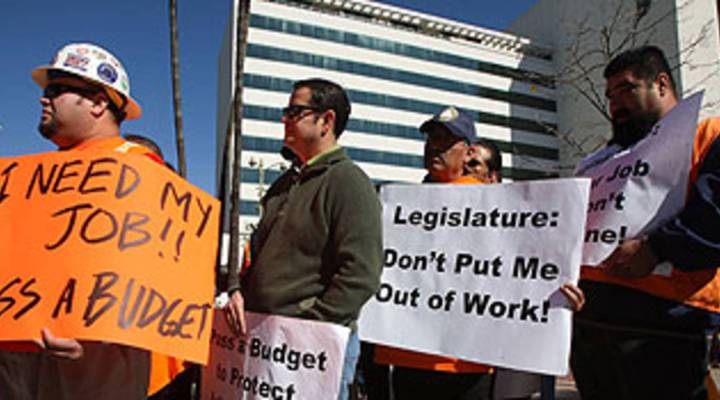 COPY
Unemployed construction workers demonstrate outside the district office of Assembly Speaker Karen Bass, in Los Angeles, Calif over the failure of the legislature to pass a state budget. David McNew/Getty Images
Fallout: The Financial Crisis

Unemployed construction workers demonstrate outside the district office of Assembly Speaker Karen Bass, in Los Angeles, Calif over the failure of the legislature to pass a state budget. David McNew/Getty Images
Listen Now

Tess Vigeland: Here in California, we produce almost $2 trillion worth of goods and services. That makes the Golden State’s economy the eighth largest in the world. But the recession, coupled with entrenched political gridlock, has our fair state in not-so-fair straits. Legislators have been trying for nearly four months to pass a budget that would close a $42 billion deficit. After pulling an all-weekender in Sacramento, they again failed to reach a deal last night and were back at the table today. But there are dire predictions that the state could run out of money within days. We asked Marketplace’s Stacey Vanek Smith to find out what a bankrupt California might look like.

Stacey Vanek-Smith: Unlike the federal government, states can’t run a deficit. So if a budget isn’t passed soon, state leaders say California would have to shut down billions of dollars worth of public works projects and hand out IOUs instead of tax refunds. California treasury spokesman Tom Dresslar.

Tom Dresslar: California’s one of the top ten economies in the world, and we are standing at the poorhouse door.

Dresslar says the budget delay has already forced California to suspend more than 5,000 infrastructure projects. Now investors are worried the state will go bankrupt and default on its debts. Standard and Poors has already given Golden State bonds the lowest rating of any state. But Nick Johnson with the center on budget and policy priorities says there’s no way California would default.

Nick Johnson: It’s hard to imagine. It would make it really hard for the state to go back to the credit markets and sell bonds to finance infrastructure improvements or day to day operations. Which would really imperil the state’s economic future.

Johnson says the state would withhold funding to education, health care and prisons before it would fail to payback bondholders. And that no state has defaulted on its bonds in more than 100 years. Nearly every state is facing a massive budget shortfall. Johnson says it’s the political infighting that’s made California’s budget problem stand out. And that’s what businesses and investors will remember, even if a budget is passed soon, says Economist Steven Levy, who studies California’s economy.

Steven Levy: We’re looking like the state that can’t get its act together. The ongoing budget political gridlock is both embarrassing and I think it will have a long term cost in terms of the confidence of investors in our bonds.

Levy says California’s budget fight goes back a decade, when the dot-com bubble burst and Republicans and Democrats couldn’t agree on where to trim.