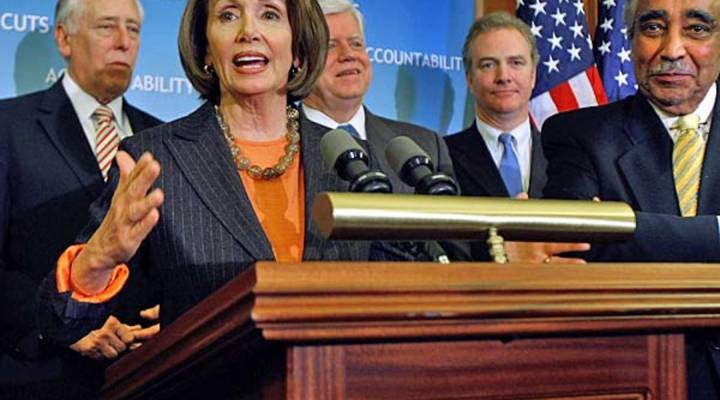 What the stimulus means for us

What the stimulus means for us

Tess Vigeland: Feeling stimulated yet? We continue our coverage of fallout from the financial crisis this week with . . . The stim-pak! That’s stimulus package for those of you who speak plain English. Lots of compromises on Capitol Hill this week. Billions of dollars cut from the bill. Billions added elsewhere. And maybe now we just cross our fingers.

But what’s in it for you and for me? And how does this all fit in with that big bank bailout from last October that made headlines again this week? Joining us to provide some answers are Marketplace Senior Editor Paddy Hirsh and our D.C. Bureau Chief John Dimsdale.

Paddy Hirsch: How you doing?

Dimsdale: $790 billion. Now you know, that’s only a little more than where it started at first. During the debate, with all the ad-ons and amendments, the bill was getting close to a trillion dollars.

Vigeland: And, Paddy, the bailout?

Hirsch: Well, you know, Tim Geithner was painting in pretty broad strokes when he talked last week about this, but we’re looking at about two and a half trillion.

Vigeland: OK. So that’s way beyond the original $700 billion bailout?

Hirsch: Oh, yes. Way beyond that. I mean, we’re talking about TARP when we talk about the 700 and there’s still 350 left. Add it all up and we’re looking at about two and a half trillion.

Vigeland: Alright. Well, John, let’s start with you. Let’s talk a little bit about this stimulus package. Let’s got through some of the help that the average American is going to get in this bill. Lots of tax cuts. Take us through these. First, the payroll.

Dimsdale: Yeah. That’s an individual income tax cut. It’s one of President Obama’s campaign promises — the make work pay tax credit. Now it has been trimmed back from the $500 per person to $400. And it’s not given out in a lump sum, it’s going to be given to you through your paycheck in the form of reduced withholding. And that’s going to come to about $13 a week for the first year. It’s a two year break, but it’s only worth about $7 a week next year. This tax cut begins to faze out for people earning more than $75,000 a year. But it is refundable, which means if you don’t earn enough to pay $400 in taxes, you can file a 1040 form next year and get the difference in a check paid to you.

Vigeland: OK. But other than that, nobody is getting a stimulus check like we saw last year?

Dimsdale: Unless you’re on Social Security, in which case you get a $250 check.

Vigeland: OK, so that’s a separate part of the stimulus package. You want to give us a few more details about that?

Dimsdale: You also get a $250 check if you’re a veteran with a pension and disabled people have a $250 check.

Vigeland: One big thing I think everybody was hoping would happen here is we have another AMT patch, the alternative minimum tax.

Dimsdale: That’s right. And it’s not really a stimulus because it basically keeps the status quo, but it shields middle class families from the AMT, which would otherwise mean an average $2,300 tax increase. And that stayed in the compromise.

Vigeland: We’ve been getting a lot of questions from listeners about the first-time homebuyer credit. And I think this is very confusing for folks. What was the final outcome on this?

Dimsdale: Well, the compromise raises the existing $7,500 loan for first-time homebuyers to an $8,000 tax credit, which means you don’t have to pay it back. Now, this does only apply to a first-home purchase before Dec. 1, so you got to get out there and start checking out those houses.

Hirsch: John, it seems to me that, and the main thrust of this is to try and get two things done. Firstly, to kind of create or retain jobs. And the second is to encourage more spending both by companies and individuals. That seems, to me, to be the sum-up of what the aim is here. Would you say that’s right?

Dimsdale: Exactly. Put some cash in peoples’ pockets so that they’ll be willing to go out to the mall, which didn’t happen, you’ll remember, last year with the big rebate.

Vigeland: Well, Paddy, let’s turn to you. What do we as individuals need to know about the rest of this bailout money?

Hirsch: Well, you know, we’ve been talking a lot about this here. And the way I like to think about it is, you know, the president, he’s got a shot gun that’s loaded for bear, right. Double barrel shotgun with two cartridges in it, and the one cartridge is the stimulus package and the other cartridge is the bank rescue plan, whatever you want to call it. And he needs to give this bear, if you like, this problem. He needs to give this bear both barrels at the same time. Because without the bank bailout package the economy is likely to stagger in future. And without a rising and improving economy, well the banks are likely not to survive. So the solution that’s required is both of these things simultaneously at the same time, which is, obviously means an enormous amount of money. I mean, we’re talking three-plus trillion dollars at this point.

Vigeland: But I think that’s where all these question come in from average Americans: Why isn’t this money coming to me? For example, nothing about loan modifications in the bailout package.

Dimsdale: From Washington’s point of view you can’t deal with mortgages and loans so easily. You have to pick winners and losers. If you’re going to be helping one person, the neighbor’s going to say, well, what about me? I’ve been paying all along, I should get some help too. President Obama has said, we will have some foreclosure relief down the road, but they haven’t figured out how to do it yet.

Hirsch: Yeah, I mean, I think they’re talking about $50 billion of the troubled asset relief plan to go towards dealing with foreclosures, but there’s been no details of how that’s going to work. And, like John says, who do you pick? Frankly, if there was some guy living next door to me who took out a ridiculous loan that there’s no way he was every going to be able to pay off, at ridiculous rates, and he got bailed out and I didn’t, I’m going to be pretty unhappy about that. So there’s some really tough choices to make here.

Vigeland: And they’ve been trying to make those for months. So I guess the question is, is another month or two going to get us there?

Hirsch: I certainly don’t know the answer to that. I speak to people on Wall Street every day. They’re looking at next year, at this point.

Dimsdale: I think it’ll be a while, yeah.

Vigeland: Well, John, before we go, let me just as you. You know, we kind of reviewed a few of the tax credits earlier. Anything else people will want to be aware of out of the stimulus package?

Dimsdale: Well, there are energy efficiency tax credits, $5 billion worth of them — incentives to weatherize your home, to use alternative fuels, to buy a plug-in hybrid. There’s also a $2,500 tax credit for college expenses, and that includes books and computers and tuition over the next two years. All of these have very st rict income limits. There’s an increase in unemployment benefits, $25 a week extends the benefits for another 20 weeks. There’s more job training, more food stamps, more head-start. And for anyone who’s getting COBRA, the law that requires employers to keep former workers on the company’s healthcare insurance policy, with presumably cheaper premiums than an unemployed person could get on their own — but those premiums are still very high, especially if you’re unemployed — the stimulus bill offers a federal subsidy of 60 percent of that premium cost. So that’s really a major benefit for the newly unemployed who could be paying $1,000 a month for health care.

Vigeland: Marketplace’s Washington bureau chief John Dimsdale and our senior editor Paddy Hirsch. Thanks guys, so much, for helping us out this week.

Hirsch: Been a pleasure.