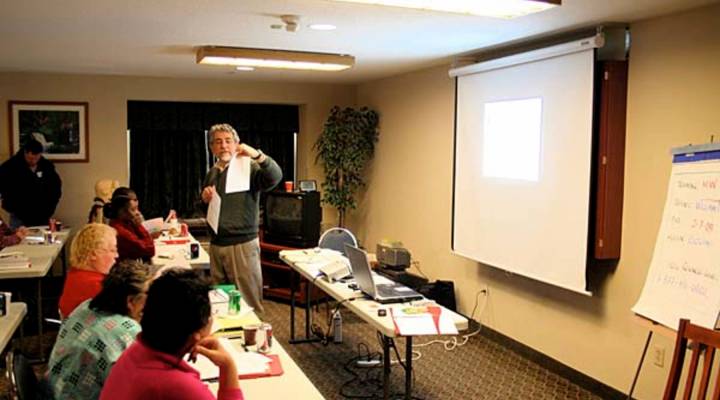 COPY
At a Portland, Ore., hotel, William Douglas teaches home-care classes on how to budget personal money and other courses in career and personal development. Ethan Lindsey

At a Portland, Ore., hotel, William Douglas teaches home-care classes on how to budget personal money and other courses in career and personal development. Ethan Lindsey
Listen Now

Tess Vigeland: The stimulus compromise is so big — $790 billion big — that we still don’t know exactly what’s in it and what’s been left out. States are still waiting on exactly what education and health care benefits they’ll get, and what that means for state workers. In Oregon, the debate has raised the visibility of one specific type of job that pays people to care for ailing family members. Home care workers have asked lawmakers to spare them from cuts. Oregon Public Broadcasting’s Ethan Lindsey reports.

Ethan Lindsey: Rusty Brown is 42 years old. He lives in a cramped mobile home on the outskirts of Eugene, Ore. He doesn’t talk much. And he needs a walker to get around. Rusty took a 75-foot fall when he was a teen. Now he is considered 100 percent disabled. And so his brother, Christopher takes care of him.

Christopher Brown: He’s very cool for the most part. You know, you get crabby with each other. Sometimes he wants to do something completely different than what needs to be done.

Christopher dresses Rusty and bathes him. They sleep in the same room. But Christopher has some official responsibilities.

But taking care of his brother isn’t just a responsibility — it’s his job. At the end of the month, Christopher Brown will get a check, from the state, for his work.

Brown: Sometimes, its pretty slacker. But sometimes it’s not, too. My other brothers all have kids and families and wives. I sacrificed that to take care of him.

In the early 1980s, Oregon became the first state to use Medicaid money to pay in-home care workers. Basically, if you have a sick or disabled family member, you can apply to the state to get paid under their Medicaid coverage as an independent contractor.

People who aren’t blood relatives can also be home health care workers. There are 10,000 people doing this work. Many states have followed Oregon’s lead. But low wages and no benefits, initially, led to high turnover and poor care. So the state of Oregon decided to raise the level of professionalism. Helen Moss is an instructor at the Labor Education and Research Center at the University of Oregon.

Helen Moss: Oregon is a pioneer in this. People start out sometimes working with a loved one, a relative, discover they like the work and then stay on and try and make a living out of it. And those are the people you want to keep.

Home care workers are now unionized. They can get healthcare coverage, make a bit more than minimum wage, and receive professional training.

On a recent winter weekend, 20 home care workers cram into a small hotel conference room in Portland. These classes teach people a whole range of things. One class is about managing a personal budget. Another is about preventing injuries when doing things like lifting a client into the bath tub.

William Douglas: And we talk about boundary issues. And those are things that someone if they were working for a GM, or Ford, or McDonald’s even, they’re going to get on the job training, and then continuing education. And this helps people enhance their profession.

But no profession is recession-proof. The state of Oregon confronts a billion dollar shortfall. There’s one proposal on the table that would cut about half of the home care worker jobs.

Back at the Brown family trailer, Christopher says the cutbacks would be hard. The union told him he might lose his job. He says he’d still care for Rusty. But he adds he’d have to go find another job, to pay the bills.

Brown: I don’t see any reason to modify a program like this that already works. And it’s already about as cheap as it can be. You don’t need to pay me any more, or, you know, if you wanted to pay me less, we can talk about it. But, you know, I don’t want to lose my job.

Christopher Brown says he used to work at a home for the disabled. That’s before he got paid to take care for his brother. And Brown says facilities like those cost more, and provide worse care. So why, he asks, would the state want to go back?