Kai Ryssdal: A lot happened this week, but it all pales in comparison to those 598,000 people who don’t have jobs anymore. As we said at top, both job losses and the unemployment rate rose last month. And that is going to have a negative impact on just about everything in the economy, including, quite possibly, prices.

To help us wrap up the week on Wall Street and beyond we’ve got Leigh Gallagher with us. She’s an editor at Fortune Magazine. Mike Mandel is the chief economist at Businessweek.

Michael Mandel: Glad to be here.

Ryssdal: So Leigh, I wanted to start with you and something that’s sort of been bubbling around out there. And it comes to light more because of the numbers out there today. The prospect that decreasing demand in this economy — that is, with fewer people working, more jobs being lost — people aren’t going to be spending as much. What is that going to do to prices and the issue of deflation?

Gallagher: Deflation is, essentially as you say, it’s a spiral of falling prices that sort of feeds upon itself because prices fall, which then makes consumers delay purchases because they expect prices to fall more. So, it’s just this sort of this vicious circle of downward falling prices that ends up sort of slowing everything. So, you know, the fear is we’re already in this slowdown, but this could be the beginning of a long, slow retrenchment.

Mandel: Well, I don’t think what we’re seeing is classic deflation. Things like furniture and autos, and a lot of good that are globally traded with this massive overproduction, we see prices collapsing. But in other parts of the economy, in the services and what I can the intangible sector — education, health care and so forth — you actually see prices still rising. So, what I see is not quite to apocalyptic a picture. I see that the things that are in overproduction, their prices are falling, which is kind of what you’d expect.

Ryssdal: Now, I don’t want to name drop here, though, but I was reading Paul Krugman this week. They guy’s won a Nobel Prize. He writes on economics a lot. And he is cataclysmically worried about this prospect of spiraling lower prices — deflation. You’re not buying that?

Mandel: You know, I mean, I respect Paul a lot. I’ve had debates with him over the years. I think that his main point is that you should pass the stimulus bill quickly, and I agree with that. One of the big things that’s happening here is that we’re having massive destruction of jobs, mainly in the goods-producing sector. But that doesn’t mean that things are quite as apocalyptic as it seems.

Ryssdal: Leigh, what is your sense of the supply-demand thing? Is it over-supply or is it under-consumption, not enough demand?

Gallagher: Well, I think it’s a little bit of both. You really saw this reflected in the GDP figures for the fourth quarter. I mean, the big headline was “goods piled up.” People weren’t buying, so inventory was piling up. And, actually, output was increased so that the real GDP number might have actually been lower. It was 3.8 percent, it might have been slowed more to the effect of five percent. So I think it’s a combination of things. I mean, there’s no doubt that the consumer has basically fallen off a cliff. But some people are raising prices. I mean, Colgate and P&G have raised prices on a few things. McDonald’s, which is doing well, which has been pretty well documented lately, has raised prices. So, some companies are doing that.

Gallagher: I think it will. I mean, one of the risks with deflation, well a few risks with it, one of the issues is that there’s not an instant cure for it. I mean, unlike inflation where you can sort of choke off with interest rates, deflation really is a little bit more problematic in that way. And, you know, the stimulus bill, whatever you say about it, it will have an effect. It will have a sort of caffeine-like jolt to the economy in the form of jobs and in the form of spending. So, that will do something to stave off deflation.

Ryssdal: Mike, what’s your sense of this stimulus package and whether or not it’s going to do anything about deflation and stimulating demand?

Mandel: Well, look at where the money in the stimulus package is going. In the House bill on the spending side, two thirds or it is going into health care and education, areas where prices are still going up. This is not a bill which is designed to stem deflation, this is a bill which is designed to reinforce this transition from a goods based economy to a services intangible economy.

Mandel: Thank you very much.

The market is not the economy … 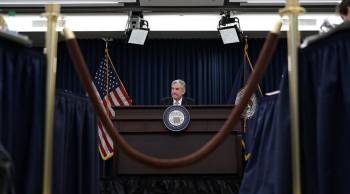 So what’s the Fed forecasting in the near economic future?