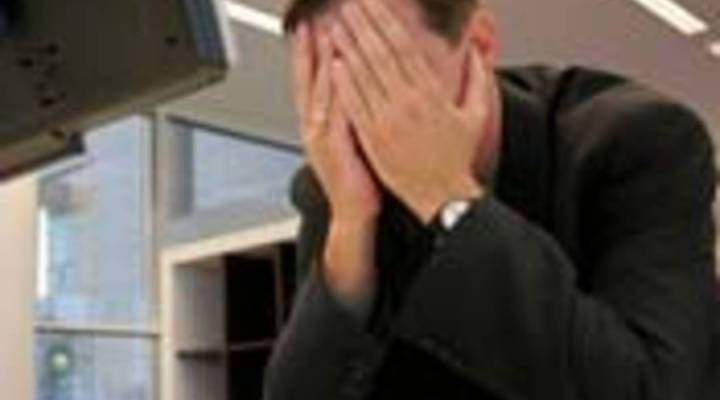 Tess Vigeland: Whether or not you use a broker, if you had any money in the markets last year, you’re starting to get statements showing just how much damage the financial crisis has done to your portfolio.

With all that paper money just vanished, you’d be forgiven for wondering if the entire market is, well, a Ponzi scheme.

Roger Lowenstein mulled this over recently in The New York Times, and he joins us now. Explain how Bernie Madoff and the S&P could be one and the same.

Roger Lowenstein: Yeah, sure. Let’s think, Tess, a little bit about how the stock market works. Because, you know, we all say we’re investing in these companies — we buy GE, we buy Google and if those companies do well, we make money, right? But, if you think about it, they don’t send us a check just because their profits go up. Once in a while, they do maybe with dividends, but…

Lowenstein: The way most of us get our reward day in, day out, is because the stock goes up and we can sell at a higher price. And what does that mean, the stock goes up? It means other people are coming in and bidding it up. So, you know, at least in the short term, even us normal investors — people who wouldn’t associate ourselves with people who invested in Bernie Madoff — we’re dependent on other people coming in and buying those stocks in an absolute sense. That’s what a Ponzi scheme is.

Vigeland: But at least we think that we’re investing in something besides air, right?

Lowenstein: Well, we are. I mean, I think you’re asking me, is there really a difference. And yes, there is a difference, because underneath the Ponzi scheme, as you say, there is nothing but air in the long term. You know, when you invest in the stock market, you do own a share of a productive enterprise and they have the power to pay dividends. And by long-term that ought to mean that you think this is a good business, it’s got a good franchise, it has, you know, customer base and so on. And the point I was making is, if you’re very dependent on the short term — let’s just say you got to sell by next Tuesday, you’re going to sell on Tuesday or Wednesday at 3:30, or whatever it is — you’re really on the hook for whether other people come in or not.

Vigeland: When we think of the short term versus the long term, I wonder if that definition has changed at all because of the economic crisis? I love your point in the article where you say, look, if you are actually watching what is going on from day to day, even month to month in this thing, you are not truly in it for the long term. What is the long term?

Lowenstein: Right. Well, you know, I don’t think it’s that the definition has changed so much. It’s how we perceive it has changed because of how things are going. When markets were going up — and it was a good long time where, with some fluctuations along the way, they mostly did go up — everybody’s a true blue, got religion, long-term investor, I can withstand the downturns.

Lowenstein: Yada yada yada. But I think what we’re seeing now, and not so much the definition of the term or the long term has changed, is we’re realizing what it really means to withstand the fluctuations or the down periods. This is a pretty severe down period. And so, you know, while we may have said to ourselves and to others we’re in it for the long haul, I don’t think we really tested ourselves or understood what that can mean.

Vigeland: Then it sounds like maybe we do need to change our notion of what the long term is. If we’re not factoring in a market like we’ve seen over the last year, then maybe we’re not as long term as we think we are?

Lowenstein: You really have to know why you’re in a stock. If you’re investing long term, it’s got to be money that you’re not going to need in eight, 12, even 24 months. You know, if you’re worried because you’re going to have to pull that money out to pay college tuition or something, that money shouldn’t be in the stock market — it never should have been in the stock market.

Vigeland: It really seems, for so many of us, so hard to trust this notion of the long term after what we’ve been through over the last six months, even if we’re nowhere near retirement. How do we get ourselves in the frame of mind to believe in the market again?

Lowenstein: Well it’s, you know, it’s just it’s very hard. When things are going great, it really would have been impossible to have convinced someone that of all the trauma and of loss that was just around the corner. It’s very hard at bottom’s retros to believe that things will ever get better. But, you know, Warren Buffett has said it: when people are fearful, be greedy.

Vigeland: Roger Lowenstein is an outside director of the Sequoia Fund and also a regular contributor to The New York Times. Thanks so much.

Lowenstein: Great talking to you.