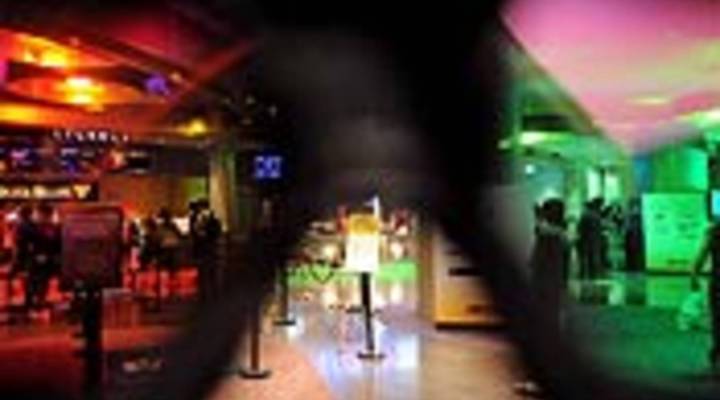 Kai Ryssdal: You’ve got your choice of movies this weekend. You could go comedy and see “Paul Blart: Mall Cop.” At least, it’s supposed to be funny. You could go kids and see something called “Hotel for Dogs.” Or you could go completely the other way and hit the 3D slasher flick “My Bloody Valentine.” The prospect of all those pick-axes coming right at you is expected to attract big audiences. But as Stacey Vanek-Smith reports, the movie industry has yet to fully enter the third dimension

Announcer: “My Bloody Valentine 3D.” Nothing says date movie like a 3D ride to hell.

Stacey Vanek-Smith: Hollywood may be taking that same ride. A couple years ago digital 3D was hailed as the next big thing, but now it looks like it might be the next big flop. Disney and Fox have dozens of costly 3D movies in the pipeline. Dreamworks Animation has poured tens of millions into its upcoming feature, Monsters and Aliens. But not many theaters are equipped for digital 3D says Patrick Corcoran, with the National Association of Theater owners.

Patrick Corcoran: We had hoped to have by the time Monsters and Aliens comes out in March to have about 4,000 3D screens. What we’re looking at now is maybe 2,000 screens.

Corcoran says the problem is cost. Upgrading a theater to run digital 3D movies can cost close to $100,000. Studios have pitched in, but entertainment industry analyst Hal Vogel says this is a tough time for theaters to invest.

Hal Vogel: The new technology, which is relatively expensive, comes at a time when the industry is not exactly flourishing economically.

But 3D can pay off. The novelty can lure people out of their living rooms and theaters can charge a premium for tickets. Unfortunately the success of 3D will depend on more than an extra dimension, says Jason Squire, professor of business and film at USC.

Jason Squire: Every movie experience comes down to content, and so it really depends on how the movies perform.

After all, 3D isn’t new. A whole spate of 3D thrillers came out in the early 50s.

Announcer: I’m sure you’d all like to know something about the new entertainment miracle, 3rd dimension. What is is. What is does.

Squire says it was just a fad because the movies, like “It Came from Outer Space” and “House of Wax,” didn’t cut it. He says the next round will have to get beyond the gimmick.

Squire: It is very exciting, but it’s also very risky. You just don’t know until the people show up.

And they may not have to if the movie industry doesn’t hurry up. Sony and Panasonic say they will roll out 3D TV as early as next year.