Scott Jagow: Today, the Bank of England cut interest rates to a percent and a half.
That’s a big deal, as our man in London, Stephen Beard, explains.

Stephen Beard: Interest rates haven’t been this low here in more than 300 years, since King William III founded the Bank of England in 1694. Today’s historic cut underlines the Bank’s deep concern. Britain is sliding rapidly into recession. The main problem is the lack of credit.

Vicky Redwood is with Capital Economics. She says that all the government’s multibillion-dollar bailouts and cash injections seem to be having no effect:

Vicky Redwood: I think that’s primarily because the banks remain reluctant to lend to us when the economy’s in a recession and they might make losses out of that lending. And that means that we’ll have to take further action. And the Bank of England and the Treasury will have to start thinking about what to do if interest rates get to zero.

In the U.S., where short-term rates are already close to zero, the Fed has just started buying mortgage-backed securities in a bid to boost the flagging economy. 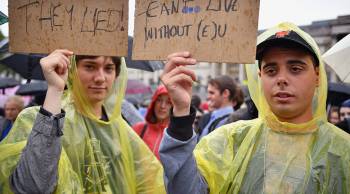