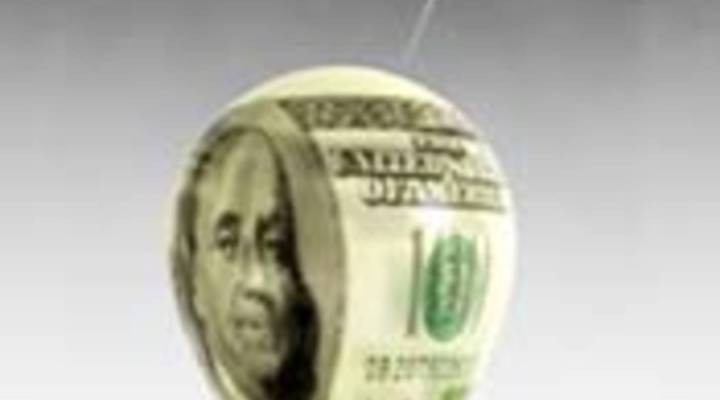 What’s deflation all about?

What’s deflation all about?

TESS VIGELAND: I saw an item at a major houseware chain this week that was marked down 50 percent from its original price. Then there was a red line through it and the next price was another 60 percent off. Plus a coupon, if you had one.

Can prices possibly get any lower? In this economy, it seems like the whole world is on sale — homes, clothes, stocks, cars. What could be wrong with that, right? Turns out, lots of things.

In this installment of the Marketplace Decoder, Stacey Vanek-Smith explains deflation.

STACEY VANEK-SMITH: So there’s this great-looking gold purse I’ve had my eye on at the Anthropologie store. It was $248, then it was $199, and now it’s $130. So I should probably make my move. But, nah, I think I’m going to wait. I think it’s going to get marked down even more now that the holidays are over.

Pretty impressive bargain shopping, right? Actually, Matthew Lloyd of Advisors Asset Management, says I’m damaging the economy. He says all of my holding out is contributing to a dangerous phenomenon known as deflation.

MATTHEW LLOYD: To put it in the most simple terms, it’s negative inflation.

Inflation happens when there’s too much money chasing too few goods and prices go up. Deflation happens when there’s not enough spending and prices start falling. That flips a switch in consumers’ brains and they start to hang back — kind of like my purse situation. Suddenly companies can’t get people to buy their stuff, they can’t grow and the economy grinds to a halt.

LLOYD: Companies end up starting to contract, and then they start laying off employees. And then the consumer starts to feel more tepid about the future, so they spend less and it starts that deflationary spiral.

Lloyd says counteracting deflation is tricky, because there’s not a lot the government can do to prevent people from waiting for the next mark-down.

LLOYD: No one can come up with a quantitative formula to define a human being and their spending habits. You can’t really address the situation through certain policies.

Deflation whacked the U.S. economy back in the ’40s. but this round could be way more serious, says Robert Manning, professor of consumer finance at the Rochester Institute of Technology. He says U.S. consumer spending has become the engine of the global economy.

ROBERT MANNING: We’re in a very perilous situation with the economy. And every help that we can to get people out of debt and being able to afford buying new goods and services is going to be crucial to restarting this economy.

So, if I don’t buy that purse, I could help push the entire world into a horrible deflationary spiral? OK, I’m sold. Things are hard enough without having global economic ruin on my conscience.