Scott Jagow: OPEC is a cartel – and cartel’s have a lot of power.
Their end game is to set prices. But the economy has decimated the demand for oil worldwide — and therefore, OPEC’s influence. This morning, a barrel is going for 2003 prices — around $37. So the question we’re asking is: Can $1 a gallon gas be far off? Here’s our senior business correspondent, Bob Moon:

Bob Moon: When you finish pumping your gas and tear off the receipt, you’re essentially getting a personal report on all the oil that’s backing up in storage tanks in Oklahoma. That’s where the benchmark price of crude is set.

OPEC can talk about cutting output all it wants, but oil analyst and trader Stephen Schork says as long as we’re burning less fuel, there’s really nothing the oil cartel can do about it.

Stephen Schork: This is not a supply issue. OPEC only controls one side of the equation — supply. OPEC just has to sit and twiddle its thumbs and wait for the consuming countries to come out of the recession.

He says prices keep falling in spite of the cartel’s vow to make further cuts, because traders don’t believe it:

Schork: They’re not even abiding by their old quotas, let alone their newly announced quotas, and this is the game the market is playing now with OPEC. It’s a massive game of financial chicken.

Or, put another way, at the moment, oil traders are convinced the deteriorating economy has OPEC over a barrel. Schork says if things don’t improve, crude could even drop as low as $20 as early as summer. 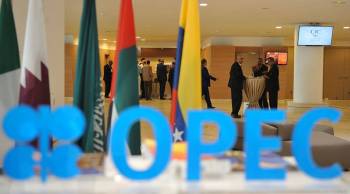