Tess Vigeland: This is Marketplace Money from American Public Media. I’m Tess Vigeland. Most students are on holiday break at this point. No more studying ’til January. Undergrad and MBA programs crank out thousands of fresh investment bankers with each graduating class. But at a time when investment bankers face a job market about as secure as . . . medieval puppetry, we wondered if business schools might be facing a crisis of their own? Sally Herships has that story.

Sally Herships: One upside of the market melt down is it’s a perfect time to teach business students about the ins and outs of finance. Jerry Langely has been a professor at Mendoza, Notre Dame’s business school, for ten years.

Jerry Langely: The text book became the Wall Street Journal everyday almost. On Wednesday I would say ok, what’s happened in the news since Monday. It used to be what happened last month? Now it’s every day; every day the current events provided 15 to 20 minutes of discussion right at the beginning of class.

Langely says the news provides good fodder for students to chew on. But it scares them too. They know that careers in investment banking are becoming scarce. More then a hundred thousand students graduate with an MBA each year so competition is intense. Patrick Perrella works at Mendoza too. He says despite the job market for MBA’s he’s not seeing anyone changing careers midstream.

Patrick Perrella: For them to switch majors all of the sudden, could actually imply that they’re going to be in school longer. So it’s not something that they can just easily make that jump.

Colleges are just as aware of the challenges this meltdown has created. So Perrella says they’re focusing on ensuring students have realistic career aims. And sometimes that means dialing back their expectations.

Perrella: You might not get your dream job coming out of MBA now. It might not be the job that you expected to get when you first came in and got your MBA but make sure it’s a job that at least gets you in the right direction.

Administrators say reality hasn’t bitten quite so hard on the undergrad campuses. Business students are still coming to school in suits and ties the way they did during the boom years. Sally Blount-Lyon is Dean at Stern, NYU’s business school. She says around a quarter of undergrads declared business as their major over the last few decades and this year it’s still one of the most popular choices, but she says that’s OK, because there’s more to business school then investment banking.

Sally Blount-Lyon: You know one of the things we joke about, the accountants have jobs. With Sarbanes-Oxley and what’s going on there will be jobs in accounting.

And accounting looks like an increasingly popular choice at Stern. Richard Barbier is an undergrad senior there. He says a lot of his friends are looking into accounting and law and away from the financial sector. Barbier has a job lined up – in consulting. He got lucky early on.

Richard Barbier: You’re seeing a lot of people out there who are going to as many different job interviews, as many different opportunities as possible. It doesn’t even have to be a field that they’re particularly passionate about. They just want to know all right, when I graduate I will be doing something.

Students with that mindset could find themselves in a similar situation to Charmian Stone. I met her in New York’s financial district during her dinner break. She told me after college she spent three and a half years at grad school. Now she has a JD and an MBA.

Herships: So you’re quite educated?

Stone: I’d like to think so but it’s tough when I’m not getting any jobs or job offers, it’s disheartening because it’s like I know I can do this.

Stone works on Wall Street, but it’s not quite the job she dreamed of. She’s a legal temp. She wants to be an investment banker. She was interviewing for jobs when the investment banks began to fail. Offers on two jobs fell through.

Stone: And now I’m settling for jobs just to pay the bills and I’m working sixty hours a week basically clocking in punch-card wise and paid by the hour and that’s not I imagined I’d be doing after getting two dual degrees, or two advanced degrees.

Wall street is full of stories like Charmian Stone’s these days. But at NYU Stern, Sally Blount-Lyon says she doesn’t think that will dissuade prospective business students.

Blount-Lyon: Business is the dominant social institution of our time. Just because Wall Street is unraveling doesn’t mean that we still don’t have goods and services and life doesn’t go on every day.

Blount-Lyon says applications for places at Stern this year were up 16 percent. For big firms a down market means cuts in jobs and budgets. B-schools are hoping for them it means more students. 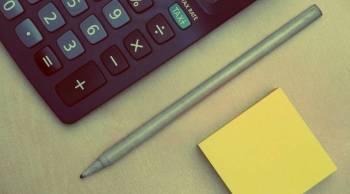