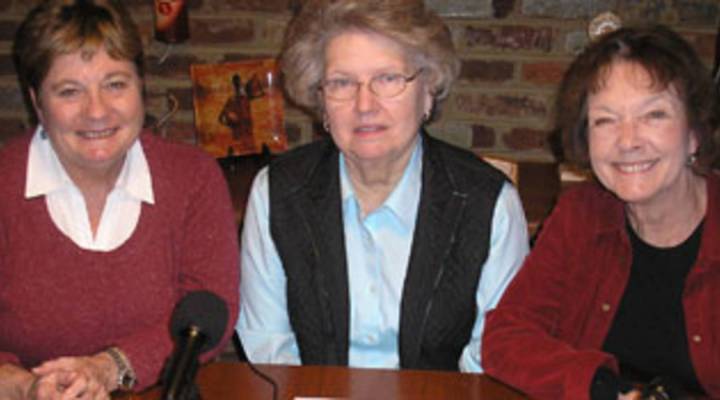 Tess Vigeland: You may remember that throughout 2007 I visited with three investment clubs. One of them, a Virginia-based club called Formerly Baroque, had a banner year, as we heard in the final installment of the series last December.

Jonelle Usselman: Of the stocks that we currently hold, we had a 16.55 percent rate of return…

So we decided to check in with them one year later to see how they’ve weathered one of the worst years ever on Wall Street. They join us from club member June Chalou’s kitchen table in Falls Church.

So nice talking to you again June.

June Chalou: Oh, it’s very nice talking to you. It’s been a while.

Vigeland: And Pat Meadows, you’re there as well?

Pat Meadows: I am also, yes, thank you.

Vigeland: Alright, and Bobbi Manley is joining us.

Vigeland: OK. Well it’s been just over a year since I last visited with you folks and at the time, I don’t know if you want me to remind you of this, but you had $137,879 in your brokerage account. Pat, let me start with you. Can you tell me how you’re doing a year later?

Meadows: Well, I can confirm that we do not have that much money in our account right now. For several reasons, though. We’ve lost two of our members, so that took a nice chunk out of the portfolio. And then with the market, we’ve had some stocks that have not done so well. I heard today that the NASDAQ in the last four months was down 40 percent and we’re not quite that far down yet, 40 percent. We’re just under that; we’re close to $60,000, so we’re less than half…

Meadows: …but a good chunk of it came because we bought out two partners.

Vigeland: June, let me ask you: what are some of the stocks that the club decided to shed this year as it watched the market tank.

Vigeland: Is that your investment strategy?

Chalou: No, actually, we would go in, we would study the stock, then buy it and watch it go down just like every other stock did in the market. And after a while we decided that we really were studying and had good companies and we were just going to hold on to our stock.

Vigeland: Bobbi, June has touched on the volatility of the market over these last several months. Can you describe how the club has dealt with days where the Dow drops 700 points and then a week later it’s up 900 points? Are there a lot of conversations that go on between in between meetings or are you at this point kind of thinking maybe that’s the new normal?

Manley: In the beginning it was really scary and we’d talk to one another by email and say, “Can you believe what happened today?” and I think we kind of got numb to it because we had made the decision to hold as best we could. Whether we feel like it’s the new norm, I don’t think so. I hope it’s not because it just gives you ulcers, if nothing else.

Vigeland: Pat, when did you all decide and how did you decide to basically stick this out?

Meadows: Well, I tell you: we believed the analysts and everyone kept saying, you know, we think we’re near the bottom, we think we’re near the bottom and it wasn’t until just recently when people started to say they thought it was going to get worse and worse and worse and we feel now that we’re trapped, that we had held on and, you know, it’s a paper loss and as long as we still have the stocks, we haven’t recognized the loss. But we are still enjoying having the club. We’ve been together too long to take it too seriously. When we invested, we all said we were going to invest with the idea that it was money that we could lose if we had to. We don’t want to. But we’re just kind of hanging in there.

Vigeland: June, I wonder if I could ask you what might be a bit of a sensitive question, but knowing what good friends you all are in the club, did you notice any sort of change in the dynamic within the group in a year that was so terrible versus the past several years when, boy, it must have been a pleasure to always go because you were making a lot of money?

Chalou: Yes, I think we all noticed that the dynamics did change from going to the meetings and having a lot of fun and just laughing about well, do we buy this stock or that stock, we had to really stop and analyze whether or not we should even buy stocks at all and finally we came to the conclusion we did need to stop and just watch the stocks that we had and some of the members felt that the club was no longer as much fun.

Vigeland: Bobbi, within the club, has there ever been any sentiment from members who say, “You know what? I’m done. No more stocks.”

Meadows: I agree with Bobbi that it’s an American institution; it’s a way of life. I know that sometimes that sounds like we’re pie in the sky and we’re Pollyannas, but the alternative is to be a negative thinker and we choose not to do that.

Vigeland: Well, June Chalou, Pat Meadows, and Bobbi Manley, all members of the Formerly Baroque investment club in Virginia. Thanks for sharing and maybe we’ll check in with you again in a year.