A brand new city in a troubled economy

A brand new city in a troubled economy

KAI RYSSDAL: A year into the recession this much is clear: No matter where you live, the slowdown either already has or soon will hit a neighborhood near you.

Over the next couple of months, in a series we’re calling Close To Home, we will take you to two very different communities to see how the slowdown is playing out.

The Temecula Valley here in Southern California is a fast growing suburb out in the desert northeast of San Diego. Edina, Minnesota, is a wealthier suburb near Minneapolis, Minnesota.

We begin today in the Temecula Valley, in the newly incorporated town of Wildomar.

From KPCC, Steven Cuevas has our story about what it’s like trying to kick-start a brand new city in a bad economy.

BOB CASHMAN: We’re unlocking the chain which holds the bell from being rung.

The mayor of Wildomar, Bob Cashman, helped restore the old cast-iron bell. It first tolled more than 100 years ago. That’s right, this new town is actually kind of old.

CASHMAN: It was founded by a group of three people. They attracted farmers from Minnesota, Iowa. They built a hotel just to help relocate people from the Midwest to Wildomar.

Now, a new wave of settlers has flooded the Temecula Valley from other parts of Southern California. These mostly white, middle-class migrants came in search of lush, open space and affordable housing. Guys like the mayor. And a new freeway made it possible to commute to jobs in San Diego and other business centers in about an hour. But there was a problem.

CASHMAN: Our voice was scarcely heard among the larger areas.

Wildomar’s population doubled in 10 years to 27,000. But planning decisions were made by the county. Neighboring cities were eager to get their own claws into Wildomar’s miles of unincorporated horse trails and housing tracts. Time to sound the alarm.

Councilwoman Cheryl Ade helped spur the quest for cityhood. Supporters believed Wildomar would lose its identity if the county continued to make its decisions. So last summer, Wildomar voters decided to go it alone.

CHERYL ADE: The county was not looking at us as a whole community because they didn’t have to.

They do now. Wildomar cut the county purse strings and is paying for all the basic services: police and fire, city staff. . .

And what a time to take over your own checkbook. In the midst of a local, and now a global, recession new development in Wildomar is at a standstill. Wal-Mart pulled out and there are about 700 homes in some stage of foreclosure. A month before it signs off on its first budget, there’s news that tax revenue is off by at least 10 percent.

It’s kind of an I-told-you-so moment for cityhood opponents like Joe McCabe.

JOE MCCABE: We’re a small area and lots of people have grandiose ideas.

McCabe is a retired aerospace engineer. I caught up with him in the foyer of Wildomar City Hall — actually a rented space behind Ace Hardware.

McCabe: I opposed cityhood, because I think economically it was not the time. We don’t have enough tax base in the city. What I saw in economics, I saw that things were going this way.

Cityhood cheerleaders are not immune to the grim economic news. But there are few if any regrets over the decision to cut the cord. The maiden city council is watching its projected $13 million budget. At its last meeting, there was even debate over splurging on a regional parade. The price tag? About 750 bucks.

Woman 1: I would just ask for your consideration not to spend the $750. Waste of taxpayers’ money.

Woman 2: If we’re going to do a float, it has to look professional. I mean we can’t be cheesy little Wildomar and that coming through. So, if you’re going . . .

A debate over a minor expense? Watching every dollar is how this new city aims to get through the tough times.

CASHMAN: But it is OK because we don’t have to lay people off. We can just hire the amount that are needed for our city. Becuse we’re a start-up city, so that’s actually to our advantage.

A new, upstart city like Wildomar may have its advantages. But like cities big and small these days, its fiscal survival largely depends on a major rebound in building and buying. When that happens, maybe the city will shell out for a parade of its own. 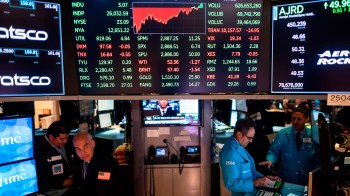