Scott Jagow: There’s a hint of desperation in the air this morning at malls and stores around the country. Not from shoppers — they’re as cool as can be. Retailers need a big day. So they’re doing sweepstakes and giveaways and discounts. And so far, the crowds have shown up. How much they’ll buy is another question all together. Danielle Karson visited a Macy’s in Bethesda, Maryland this morning.

Danielle Karson: At 4:45 a.m., dozens of serious bargain hunters awaited Macy’s opening. Temperatures hovered in the 30’s. People huddled in their cars with the motors running and the heat on. One man, wearing gloves, rolled down the window of his SUV. He plans to buy clothes. How much does he plan to spend?

Inside this Macy’s, it’s a sea of sale signs. This shopper was thrilled:

Female Shopper: We’re not buying unless it’s on sale, right? Haha I do see some sales. There’s 75 percent off, there’s 50 percent off. And then I stopped this morning and got newspapers so that we could get an extra $10 off.

She wants to pay for everything in cash this year — no credit cards — because she doesn’t want to go into debt.

The National Retail Federation says holiday shoppers spent on average $350 last year. But shoppers at this store are on a tight budget this year. One man lamented that he’s not getting a pay raise, so that flat panel TV he wanted is, alas, off his shopping list. 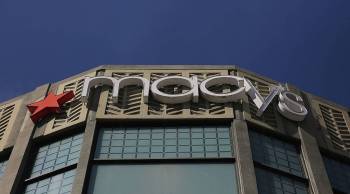