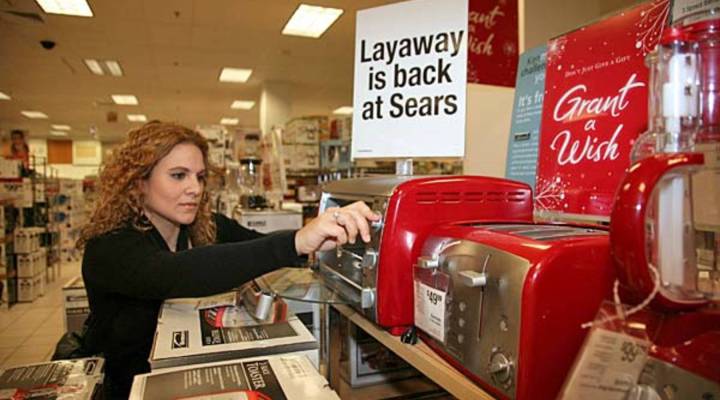 COPY
Natalie Lafuentes shops for a toaster at a Sears store in Yonkers, N.Y. Retailers such as Sears are seeing a resurgence in the use of layaway plans. Yvonne Hemsey/Getty Images

Natalie Lafuentes shops for a toaster at a Sears store in Yonkers, N.Y. Retailers such as Sears are seeing a resurgence in the use of layaway plans. Yvonne Hemsey/Getty Images
Listen Now

Bob mentioned the big retail season and how everyone from store owners to economists is hoping we all go out and spend lots of money. Yeah, right. Great time to be doing that.

But for those who are and don’t necessarily want to plunk down the plastic, Marketplace’s Stacey Vanek-Smith tells us about an old spending method that’s new again.

Stacey Vanek-Smith: Ah, the holidays — time to decorate the tree, put on 10 pounds and max out your credit card.

Last year, Americans spent about $475 billion during the shopping season — more than a quarter of it on plastic. Not this year, says Candace Corlett, president of WSL Strategic Retail.

Candace Corlett: We have a third of shoppers telling us “I’m less likely to put things on my credit card now than I was a year ago,” so there is more of a pay-as-you-go mindset.

In other words, a return to a ghost of retail past…

[Clip from “Lay-away” by The Isley Brothers]: Gonna put it in the layaway // Coming back to get it on another day…

If you remember the Isley Brothers, you probably remember layaway; You pick out what you want, the store puts it aside, you pay a little bit each month and take it home when it’s finally paid off. Credit cards pretty much made layaway obsolete, but retailers that kept their programs, like TJ Maxx and Marshalls, say business is booming this year. Kmart has made layaway the centerpiece of its holiday sales strategy.

[Clip from Kmart Ad]: Exclusive Kmart layaway! Get the hottest gifts on your list now, pay a little each week and pick them up in the nick of time. There’s smart and there’s Kmart smart!

Kmart VP Terry Brophey says, when credit began drying up, they knew layaway would make a comeback. It lets customers pay a little bit at a time and it also lets them get dibs on stuff now so they don’t have to risk some hot item won’t be in stock by the time they’ve saved enough money.

Terry Brophey: Customers that perhaps tyically had not thought of layaway as an option for themselves, you could just see the light bulbs going on in their heads going “You know, this really makes a lot of sense, because why would I want to rack up that credit card debt and pay 18 percent interest?” Plus it’s the storage option: kids aren’t sneaking through closets and under beds looking for presents. So it really is kind of the perfect solution. So we knew early on just from really being in touch with our customer that this was going to be big and, boy, it has already been really big.

Brophey says more than a million customers have used layaway so far this year. Smaller retailers are also getting with the program. At Lush, a posh shoe store in Los Angeles, model Rain Thomas shows off a pair of $400 sandals she just picked up on layaway.

Thomas: Well, I am right now getting iPods for my brothers for Christmas because they don’t have any and they need to catch up with technology. It’s just easier for me to put all the items on layaway, know that they’re there, do it early and then pay it off and then at Christmas they’re ready to go.

For the iPods, Thomas is using eLayaway. The online service has deals with more than a thousand retailers, including Apple and the Gap. eLayaway’s Michael Bilello says this is layaway 2.0.

Michael Bilello: We’ve got travel on there, we’ve got day spas who offer botox. We’ve got restaurants who offer gift certificates and large party packages. Medical hair restoration is one of our merchants. I’ve also seen someone layaway an entire hair transplant procedure for I believe $12,000.

Bilello says eLayaway is now signing up about a thousand new people a day. The average customer picks out about $600 worth of stuff and pays for it over three-and-a-half months. That’s not exactly the instant gratification plastic offers, but model Rain Thomas says it has other benefits.

Thomas: When I do finally get that item, it’s mine, it’s paid off. I don’t own anybody anything for it and that makes me feel good. It makes me feel a lot more responsible and smarter and more grown up than when I was 18 years old and I was buying things on credit cards that I couldn’t pay back. I mean, when you think about it, credit cards are crazy! It’s a crazy system to think about how much more you end up paying for an item.

And with layaway, you can scratch “pay credit card bill” off your list of permanent New Year’s Resolutions.