Raise a toast to the craft beer

Raise a toast to the craft beer

KAI RYSSDAL: A lot of you are probably on the road right now, bemoaning the traffic, but at the same time looking forward to a nice holiday. Hoping you can relax a little bit. Watch some football. Eat some turkey.

Go ahead, have a beer or two as well. And a good one, please. Not something watery.

Author Brian Yaeger’s got a book out on the good ones. Those smaller, homegrown brews. I joined him for a cold one or four not long ago. And to start, I asked him exactly what a craft beer is.

BRIAN Yaeger: There are people who rigorously debate what is a craft beer. And generally they’ll tell you that it is an independent company, or at least one that is majority owned by the founders or by someone. Because, in this day and age, there are so many levels of ownership, sometimes a craft brew could have a minority ownership from one of the larger breweries.

RYSSDAL: Oh, now how distressing is that to find out.

Yaeger: It’s a question of survival, really. Sometimes the owners have discovered in order to get into the marketplace, to get onto the shelves, they need to be delivered by the trucks with those bigger logos. But usually a strict minority interest will keep the craft beer considered independent. Of course, anything that is still found in, say, Bisbee, Arizona, I would argue is not even a microbrewery, it’s a nanobrewery. It’s tiny.

RYSSDAL: All right. Well, we are actually in a bar. Not a brew pub, not a brewery, but a bar. And so what we’re going to do is we’re actually going to order some beers. And I’m going to actually leave it to you, since you’re the beer guy. . .

Yaeger: I’ll make four selections here. For dark, we have to go Old Rasputin Russian Imperial Stout. For IPA, we have to go Racer 5 IPA. We could always go for the Craftsman 1903 Lager, which is a lager but more flavorful.

RYSSDAL: Well, let’s do that — the lager, yeah.

Yaeger: And for something a little milder, shall we say . . . I see Amstel Light on the menu.

RYSSDAL: Tell me about the jump some of these family enterprises make from avocation — that is, basically doing it in the garage — to occupation and, eventually, a real business.

Yaeger: You really saw that trend start in the late ’70s. President Jimmy Carter did the best thing that he did in his term. He signed the Cranston Act. He legalized the act of home brewing. So, there were people who lived all over the country and they were doing this. It was contraband. They were making their own beer.

Yaeger: Exactly. Exactly. And they thought, “Well, wait a minute. Now that I’m allowed to do this, what if I turn my avocation into a vocation.” And thank God they did. Because from that we got Sierra Nevada. We got the Widmer Brothers, who are now one of the biggest craft breweries. But they started out as home brewers.

RYSSDAL: So, let’s have a sip of the stout, here.

RYSSDAL: Oh my god. There is nothing like a beer after a day like we’ve been having in the markets.

Yaeger: You should know that this is an imperial stout. That just means bigger than your usual stout. It’s higher in alcohol. It’ll getcha.

RYSSDAL: Oh, perfect, that’s just what I need. Uh, clearly the economy’s having some problems. Disposable income is at a premium. What’s that going to do to the craft brew sector when these good beers that we’ve been drinking cost $3, $4, $5 more than a six-pack of Bud Light?

Yaeger: I could tell you that, just for the numbers of 2007, the craft beer segment actually climbed 12 percent. And that is actually an improvement from a decline a couple years ago. Even though people may have less money to spend, it’s just a luxury in a bottle and it’s not going to set you back a whole lot.

RYSSDAL: Do you see the Big Three — that is, Miller and Anheuser-Busch and Coors . . .

Yaeger: Miller and Coors actually merged. So you could technically say the Big Two.

RYSSDAL: The Big Two, right. I’ve been seeing lately on television some of those brewers coming out with more craft-brew-seeming concoctions. You know, they’re slightly darker, different labels and all that stuff. Are they really aware of craft brews as a competitive threat? Or is it just they want to appeal to that audience?

Yaeger: I actually think that it may come back to bite them. They might turn on people who are Budweiser die-hards and let them realize that there is a better taste in beer out there. And they’re going to use Budweiser Ale as a gateway beer, so to speak, to the world of better craft beers.

RYSSDAL: The book by Brian Yaeger is called “Red, White and Brew.” Brian, thanks a lot.

Yaeger: Thank you, very much. 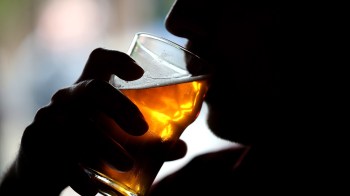