Tess Vigeland: We’re going to continue our discussion now of the 401(k) system.

Teresa Ghilarducci is an economist with the New School in New York, and Teresa, with pensions, the so-called defined-benefit system, your company sets aside money and you know what you’re getting in return. With 401(k)s, you put the money in voluntarily and then you cross your fingers that you’ll have something in the end — your return depends on the markets.

Teresa Ghilarducci: There’s actually another thing it depends upon: You don’t actually get to survey the whole market and decide where to invest. You only can invest in the places that your employer has chosen for you. We’re also finding that there’s often a conflict of interest between the firm’s loyalty to you and the firm’s loyalty to the financial firms that they choose. The other problem is that most people withdraw money from their 401(k) plan before retirement, and worse, many employees think that employers are required to contribute to 401(k) plans, but in fact it’s only voluntary from the employers point of view.

Vigeland: Given that we’ve seen a massive shift from the pension system to the 401(k) system, do either of them provide enough retirement income, with of course the add on of Social Security?

Ghilarducci: That’s a good question. If you have a defined benefit plan and you work for a company at about age 40 and you keep it until you retire, the defined benefit plan, the tradition pension plan and Social Security will give you enough. The 401(k) plan is now a little under $100,000 on average for someone approaching retirement. That, for an average earner, will not give you enough with Social Security to replace your income. And so I’ve declared, for most people, the 401(k) system is a failed experiment.

Vigeland: You called 401(k)s a “failed experiment” — is that fair given that they’ve really only been popular since the ’90s?

Ghilarducci: Yes. It is fair because the projections of what they could do are really based on our observations of human behavior. Most experts are convinced that people will withdraw the money from their 401(k)s before they retire, and if they do that and only save at the extent that they are saving — you know, 5, 10 percent — they’ll never be able to supplement Social Security to provide an adequate retirement savings.

Ghilarducci: What I’ve proposed is an expansion of the Social Security system with a twist. I propose that at minimum people contribute five percent, with perhaps some help from their employer. That money would be invested by the government in stocks and bonds and other assets, and in return for their contributions, the federal government would guarantee three percent adjusted for inflation, so today it would be about seven percent guaranteed return. And everybody I’ve talked to said they would jump at that chance to earn seven percent return on their 401(k) plan, given what they’ve just gone through, which is a negative 22 percent, at best, return on their income.

Vigeland: Teresa Ghilarducci is professor of economic policy analysis at the New School for Social Research in New York and her book, “When I’m 64: The Plot Against Pensions and the Plan to Save Them” came out this year. Thanks so much for your help today.

Ghilarducci: Thanks Tess. It was an honor to be with you. 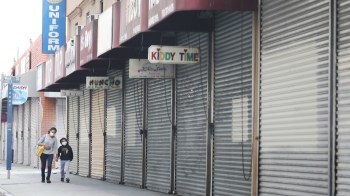