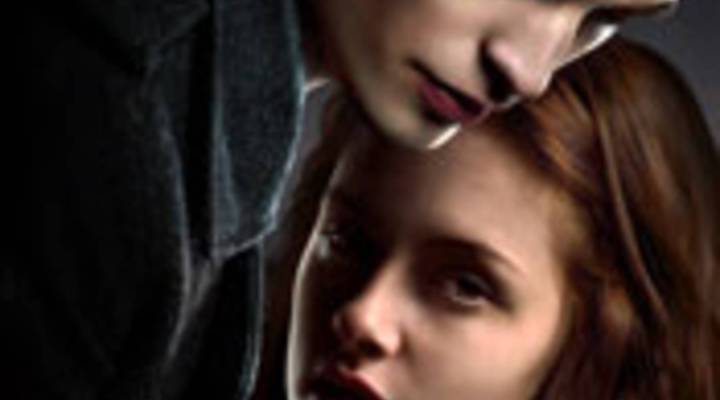 Tess Vigeland:
You may think tomorrow is not just another day. Well, it’s not.
For teenage girls, Friday is all about “Twilight.”
Not as in the actual going-down-of-the-sun.
But as in the teen vampire movie based on the series of best-selling books.
As in the tens of millions in advance ticket sales.
As in the posters and T-shirts and zillions of dollars in marketing tie-ins.
That kind of spending frenzy may seem surprising given the times.
But as Marketplace’s Stacey Vanek-Smith reports, even in a dark economy
the teen movie market still delivers a whole lotta bite.

Stacey Vanek-Smith:
For those of you unfamiliar with the saga of shy teenage Bella and her dreamy vampire-boyfriend, Edward, I will let 13-year-old Izzy sum it up.

Sales have been amazing, too. Hundreds of theaters are already sold out for opening day and the “Twilight” soundtrack is the top download on iTunes. Goth retailer Hot Topic is making a killing on “Twilight” T-shirts, posters and wristbands, at a time when stores are bleeding red ink. Adrienne Tennant is a consumer analyst for FBR Capital Markets.

Adrienne Tennant: The only way a consumer is going to part with their dollar is if there is something that they desperately want. And to have this pandemonium around “Twilight,” that’s driving the actual sale.

Tennant says the teen market is worth about $100 billion and “Twilight” has tapped into an especially rich vein. Teenage girls are behind the phenomenal success of Hannah Montana, Disney’s “High School Musical” series and bands like the Jonas Brothers.

Tennant: The girls at that age are very vocal. They have a lot of say with regard to where household income will be spent.

And, according to 13-year-old Izzy, “Twilight’s” heart-throb vampire makes it easy to part to with your allowance.

Bella on tape of “Twilight” ad: Your skin is pale white and ice cold.

Edward: Are you afraid?

Izzy: Oh my god, he’s like gorgeous. I have like 10 pictures of him, this one and this one.

Izzy also has tickets for the show tomorrow, right after school.